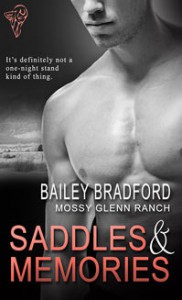 "It's where your heart feels safe, where you know you're loved."

'Saddles and Memories' is book #3 in the Mossy Glenn Series and it is by far the best one yet. It may even end up being my favourite one in the whole series. I'll let you know when I'm done. I really came to like Salt, he's one of the ranch hands on the Mossy Glenn and he's been on the fringes in the first two books but this one...this was Salt's story, Salt and Andy.

Two men who have spent their lives settling for quick hook-ups in dark corners or one night stands were the best either of them hoped to have. Ironically it was also all they thought they'd have together. But they soon discovered that one night was no where near enough and they needed to find a way to get more.  I liked these two men, they were mature and I felt their connection. I liked that while they both felt the strong draw of the other they weren't professing undying love for each other. But they each wanted to see where things could go, to see if there was more than a friends with benefits relationship there for them and they were realist they knew it was going to take effort on both their parts. Even when Andy's family life threatened to pull things apart they were drawn together, giving each other strength and support. Something to see them through. Simply put for me it all worked and worked well.

The quote at the start of my review is from the book and even if the book hadn't been as enjoyable as it was this quote and where it was in the story and why it was said (it was actually used more than once) it grabbed my heart and there may have been a tissue or two involved.

Here's hoping that book 4 is at least as good as this one...I'll get back to you on that.