Best of the bunch... 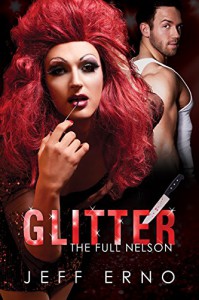 "Glitter" was for me the best book of the 3 that I read in Jeff Erno's 'Full Nelson' series. I enjoyed the character of Glitter and the club where she worked was filled with some interesting personalities that showed strong potential for their own stories, however, my biggest problem with this series is I just don't care for the main character.

Chris Nelson is the main character in this series, hence the title and he's a total disconnect for me. I think he's suppose to be a hot headed cop with a heart of gold who's passionate about his work or at least that's the impression I think the author wants us to have most of the time I feel like he's a bit of a self centred jerk who stumbles onto the solutions by accident and I don't get Ethan at all but he really doesn't have much page time. Ethan is suppose to be a school teacher who doesn't seem to be smart enough to figure out that he can't cook...sorry Ethan, you need to just give it up, this shtick of cooking when you can't just doesn't work for me, it's boring and it makes Ethan at times came off as being a real dumb bunny and a total piece of fluff.

The other big issue I had with these stories is the time line book one starts with Chris & Ethan going away to celebrate their anniversary after nearly 4 years together. Also according to book 1 they are married, I believe somewhere it says this is their 3rd anniversary, however, in book 2 Chris says that he and Ethan have been married 'almost 2 years' and book 3 has a comment about how they plan on getting married when the state they live in legalizes marriage for same sex partners...so yes, confusing. Are they married or aren't they? and for how long? This kind of timeline confusion for me is just not cool.

Sadly the only thing about Chris & Ethan that I know for sure is that they like to role play. This was made very clear throughout the course of these stories and even more sadly there was rarely, if ever any relevance to the role playing nor did it in any way enhance the story at times I also found it more than a little bit annoying as it was almost like an infomercial...we interrupt this story to bring you further details on the role playing activities of Chris & Ethan? Really? who cares...not I said the reader as she started skimming the pages to get back to the story at hand.

So the question remains why 3 stars? Mostly because I really liked the character of Andrew Brooks a young man who works as a drag queen at Bambi's, the club where most of this story takes place. I also liked his younger brother Todd, who appears to be something that he's not. Then there's Andrew's mother. Not the perfect mother, but a mother who loves her sons enough to be willing to re-evaluate her own beliefs and values when she realizes that they don't coincide with the unconditional love her son deserves. To me these characters showed the potential to create a strong and interesting story with people that I could relate to and want to know more about rather than a  cop who seems to like spending a lot of time on his soapbox telling others how they should think and feel as he stumbles from one crime to the next and and then goes home to role play with his partner who should be a fun loving, teacher who cares passionately about the world around him and the impact he has on the young minds that he has chosen to be help educate and yet he comes across as little more than eye candy and fluff.