This is the series that never ends, yes it goes on and on my friend... 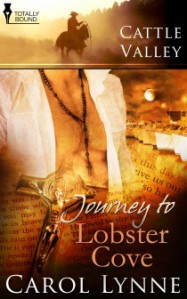 Seriously we're at book #32 and this is by no means a wrap. It is in fact the beginning of a whole lot more. The previous 31 books were set in Cattle Valley where we met a whole wealth of characters and now one of those men, Asa Montgomery, who happens to be rich beyond belief has bought himself a whole town. Some of the characters from Cattle Valley will be heading there with him and I like that. We'll have Asa and his partner Mario (sorry no Luigi, yet), Cullen who finally got his man in this story, Sully, who we've just barely met, other characters will I'm sure show up from time to time, Nate, Ryan & Rio are definitely on board to help as are Snake and Priest.

I don't think I could in all honesty say that this series is an epic or awesome or even amazingly good read. But in all fairness I've read every book so there's definitely something that just keeps me coming back for more. I had thought that maybe this would be the end of the trail for me but now that I've read this book I'm pretty sure I'll be sticking around to see what Lobster Cove holds for these men and the new ones who we have yet to meet or as with the new Sheriff in Lobster Cove, have barely met.

Lobster Cove is being created as a safe haven for the young men that Joseph Allenbrand has been rescuing over the years off the streets of Washington, things just aren't safe there for his group home anymore. Joseph as we discovered in a much earlier novel was the first love of Nate (partner to Ryan & Rio). So with all these men's lives so nicely interconnected Lobster Cove is going to be an interesting blend of the old and the new.

I'm already more than a little curious about Zander, one of the boys currently living in the group home. He's a sweetie and life had not been kind to him, but with a little help from Cullen and Kit (from Hawk's Landing CV #23) hopefully things will get better. Then there's Nick another member of the group home who seems to have a strong interest in Zander the question is, is it personal or is it because he wants to keep the group home low key and off of everyone's radar so the residents will have a safe haven? as he claims, I'm sure with time we'll find out. There's also Pip, yet another resident of the group home.

There's a quaint little diner in Lobster Cove run by a sweet elderly couple who will be staying around because 'as long as they pay for their food and take their hat off when they're in the diner' they don't care who eats at their establishment and don't they have a nephew named Bishop. Bishop is gay and he's a chef...mmm...I wonder who's future we'll see Bishop in? Now I'm not 100% sure about this but I vaguely remember in one of her other books that I read Ms Lynne had a character named Bishop. So of course I'm curious to see where this might go will there be a tie-in with yet another series or maybe he's a minor character from an earlier Cattle Valley story, I'm just not sure?

There you have it just the tip of the iceberg as to why I don't see me quitting this series for a while. There's just way too much going on for me not to want to know? I mean really? It's small town life and I'm a small town girl and you know what they say? If you live in a small town and you don't remember what you did yesterday...just ask your neighbour and they'll be able to tell you.