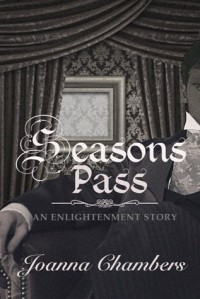 Season's Pass is a short interlude that takes place between the first and second book of Joanna Chambers series Enlightenment. Following a dinner with his father at which he is 'requested' to represent the family in Edinburgh Murdo returns home and discovers an invitation from Kit Redford to attend a reception at a very exclusive gentlemen's club as innocuous as it looks Murdo knows the importance of this invitation and complies.

It is here that he encounters Kit Redford, the club's owner as well as his friend Iain Sinclair, so really this is where the story begins for me. Don't get me wrong I quite like Murdo and David (who is not actually on page in this short story) but I FREAKING LOVE IAIN SINCLAIR!!!!

I want a whole book about Iain and the mysterious James who we met in this story very briefly. James seems to ruffle Iain's composure to the extreme. So we need to know about him. Who is he? What is his relationship to Iain? Is there a romantic entanglement? And maybe we could have a bit of Kit Redford in this story as well because he also intrigued me.

So there you have it 20 pages and I've already read all of the books in this series yet the author has me desperate for more, not about Murdo and David, although I wouldn't turn my nose up at that either, but what I'd really, really love as I said is more about Iain, James and Kit. Historical fiction is still not a huge favorite of mine but the men of Enlightenment seem to be good at getting my attention in spite of that.