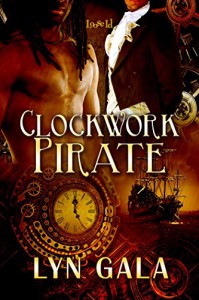 Steampunk is not one of my usual genres but that may change. Clockwork Pirate was my second maybe third foray into this genre as well as the writings of this author and I have enjoyed both a great deal. I loved the world building that this author did as well as the character development.

The google definition for the term 'steampunk' is   a genre of science fiction that typically features steam-powered machinery rather than advanced technology. But what makes this genre so different for me is what the author does with that basic definition and in this case the author chose to take us into the world of pirates. 'Clockwork Pirate' is set in the 1890s and while there are a number of things in this story that didn't exist in the 1890s of our world there are also a number of issues that did. Things such as racial discrimination, gender discrimination, class distinctions that allowed for abuse of power and privilege by the upper class of society and needless to say discrimination based on an individual's sexual orientation. These were not pretty times especially if you were not a male of the upper class with both money and title and even that had it's own challenges and demands creating another type of hell for the individual.

I loved all the gizmos and gadgets  created by Beche's friend, Fabrice, and Alex's sister, Aster. I was filled with glee as Philla, Alex's other sister plotted to control her life and be the master of her own destiny and in the end to give that to Alex as well. Most of all I enjoyed watching Beche and Alex go from adversaries to lovers willing to risk it all for the safety of each other and those they care about.

Ms Gala has given us a collection of uniquely interesting characters who have come together largely through circumstances beyond their control and have found that they have more common bonds than they realized. Throughout this story relationships grow and change shifting from enemies to friends, sometimes even lovers. At the end of it all we have an unusual collection of allies working together to give themselves a world where they have more control of their lives than society would otherwise allow.

'Clockwork Pirate' is a swashbuckler, a romance, an adventure and a unique look at what can happen when people are able to see beyond preconceived notions and societal ideals to the heart of a person.