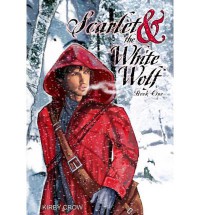 You sure are looking good
You're everything that a big bad wolf could want...

Well of course this song came to mind for me. Come on now...tell me you're surprised? I mean really we have a cute guy, named Scarlet, in a red hooded coat who travels through the woods...ok, he kind of travels all over the place he's a peddler and we have a big, hunky, aggressive, use to getting his own way bad guy...but not really who people refer to as a wolf but in fact goes by the name Liall. It's inevitable...right?

I really have no problem with this because 'Scarlet and the White Wolf' goes well beyond the traditional story of Little Red Riding Hood. Kirby Crow gives us a whole different world for this story to evolve in and to be honest for the most part it's not a pretty world. It's filled with conflict and strife, often times the law of the land is survival of the fittest. This is not planet earth and our rules, values and morals don't apply. Anyone who reads fantasy with any regularity knows that's one of the first things you have to remember. It doesn't mean that there aren't values and morals to be found or followed, just that they may be different than what we would expect.

I was totally enchanted with this story it's two of my favorite genres fantasy + m/m and for me it was really well done. As is often the case with fantasy books set in a fictitious environment there were many new things to be discovered the least of which were some of the words used by the characters. I had no problem with this as I found that for the most part the words were used in such a way that their meaning was easily discernable from the content surrounding them...at least it wasn't Klingon because lordie I never did get a handle on that one or elvish, it totally eludes me. What I really would have loved would have been a map of this world. Mostly because geography was never my strong suit so visualizing this part of the story for me is the hardest part but give me a map and I'm golden.

'Scarlet And the White Wolf' is the beginning of this series and it was a fan-freakin-tastic beginning. I admit it I've already stuck my nose into the next book.

Last but not least a big thank you to my friend, Ma'rella for pushing me to read this book and for all the visuals of Scarlet and Liall. Lady you are awesome.