I was supposed to be reading somthing else and I squirreled... True facts. I was looking for another  book that I thought was on my e-reader and this one caught my eye. Couldn't find the other book because as I discovered I hadn't actually put it on my e-reader. So I've remedied that problem but in the meantime this was a fairly short read at about 130 pages so I carried on.

'Always Been You' ended up being a good read as opposed to the awesomeness that I had been hoping for. The premise was sweet two guys in love with each other one gay and of course one straight or so our gay guy thinks.  High school graduation should have been the beginning for Seth and Jared but instead it turned out to be the end...ok, a really long pause, like 11 years long. Until fate brings Seth back to their home time allowing Jared his second chance. Jared is determined to clear up whatever the misunderstanding was that caused Seth to run from him all those years ago. This sounded like it had the potential to have a lot of angst and I would have been ok with that if it had, but in the end I was spared the angst and I liked that. I was ok with the fact that there was  a breakdown in communication between our two MCs which ended up being a big contributor to their problem but to continue that 11 years later when these men have both matured and have each become successful in their own right would have seemed a bit much. So, I was glad that the author didn't choose that route to continue their story. Instead we got to see a sweet reunion between these two as they got to know each other again and realize that their feelings were still as strong as ever and just to keep things interesting the impact of the  outside influences that caused the original separation played out as part of the current story adding a bit of tension and drama as well as providing further detail to past events.

What took this from being at least a 4 star read for me was the sex. Sorry guys, I just wasn't feeling the love. I found my mind wandering here, there and everywhere. I made a couple of to do list and honestly had a little trouble keeping track of who was doing what to whom on occasion. It just wasn't working.

For example, I want a show of hands here and be honest with me and yourselves... you're at your parents' home. They're downstairs along with your two very young impressionable children and you are all there because you've had a very disturbing encounter with someone who has not only threatened your well being but that of your children. Are you really and truly going to be up for a round of mind blowing, scream your partners name out loud sex in your childhood bedroom knowing who your audience is? If yes than all I can say is your inhibitions are way less than mine because knowing my parents would hear me is enough to douse that fire. Add in two small children and it's game over because we all know children have no filters when it comes to the questions they ask...so really? Do you want to have to navigate that minefield? Sorry, I pretty much lost it on that one between picturing the look on my parents faces and imagining the types of questions kids can ask...I wasn't sure whether it would be appropriate to laugh or cry.

At the end of it all this was an ok story and before I forget while neither of these things factored into my rating they do warrant being mentioned:

As near as I can tell the cover that appears at the top of my review is the original cover and if that is correct as far as I'm concerned changing it was a good idea. Because rather than looking like a picture of two men who are supposedly the same age it looks like a picture of a man who could possibly be in his late 20s and a much younger man who appears to still be in his teen years. I believe this is the updated cover and one where the men appear more appropriately matched in age as the story implies and yes in general I like this cover much better. 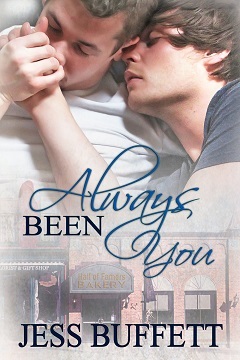 Last of all the editing could have been a bit better I'm pretty sure that was part of the problem in at least one of those sex scenes. They were just too convoluted or maybe just went on too long. More importantly and yes I have to admit this one still irritates me. I am sitting 'here' at my desk typing this review, however, if I want to listen to what you are saying I need to 'hear' with my 'ears (h-ear).  This is basic grammar you're, your, they're, their, there, hear, here, wear, where, ware, I, eye, see, sea, bare, bear, and the list goes on but still it's basic. If you want to write a book and have me spend my money on it at least know these things use them appropriately, edit for them and if can't afford a professional editor asking a friend with strong English skills don't ass-u-me you'll spot your own mistakes (chances are if you made the mistake you're not going to realize it's a mistake) and if you don't or aren't sure...well, google is your friend. Please use it.