Another case of better late than never... 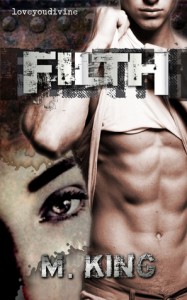 I have owned this book since it's release back in 2013 and every time I decided to read it I managed to squirrel off to something else and now I know why. Let me start by saying this book is incredible. It is well written, it is a story that desperately needed to be told.

Toni wants to be a girl. She wants what is outside to match what's inside. She's probably not taking the best route to get there. Especially the whole self medicating that really had me holding my breath. Such a bad, bad idea. But when your medical plan is non-existent, when there are monetary limitations and when you haven't had the good fortune of finding medical professionals that you feel understand you and are sympathetic to your situation. Sometimes you take what you feel is the only option that's viable for you.

Kel loves Toni and will do anything for him (yes, mostly Kel refers to Toni as him) and by anything I mean Kel makes the money they need to live on and to buy Toni's meds by turning tricks. For Kel it's not about whether Toni wants to be male or female it's about wanting Toni to be happy and safe and whatever that takes Kel's willing to do.

Two people in love, trying to make it work and trying to find themselves at the same time. But for all their faults and problems they both know one thing and that's the fact that what matters most is being with the person they love.

Kel and Toni have so many strikes against them it's simply heartbreaking. They both have addictions that they fight on a daily basis, given all the issues that they have you'd think they'd talk more but honestly I don't believe either of these two have ever been exposed to an environment where open and adult discourse on problems and concerns has ever been something they were exposed too. So sometimes you do what you know how to do. You bury it, you shove all the hurt, anger, frustration, anxiety and everything else deep down where no one can see it, even you, because that's what you know how to do. That's how you were raised to solve a problem. Sometimes it works, maybe only for a little while. But hey, sometimes in life you take what you can get.

Kel and Toni face life to the best of their abilities and when life throws them for a loop they find out what they're each made of and they also see that the other person is more than they had realized. They don't let life's problems and challenges drive them apart instead they draw together and become stronger, better as a couple.

'Filth' is so much more than a simple love story. It's a story about figuring out who you are and how to be true to yourself and listening to that inner voice that comes from your heart and not the one the echoes your self doubts. It's about choices. Choices that affect you, the person you love and your friends. It's about the journey from finding love to making it work and ultimately keeping it.

The hardest thing about this story for me was spending so much time wandering around inside Toni and Kel's minds. Seeing and knowing the thoughts that were going through their minds and that they were or weren't sharing with each other but most of all I was always aware of the intensity of their feelings for each other. It wasn't something that was always out there and on display for the rest of the world or even for each other but it was a constant intense presence in their hearts and minds and it felt like such an intimate part of each character to be privy too that I'm left with a bit of a dull ache in my heart and an empty spot in the pit of my stomach now that the story is done.