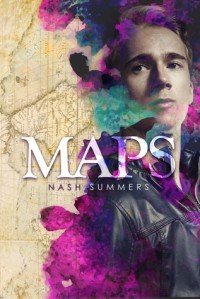 I was suppose to love this one. All my friends did and I loved the reviews and I loved Carte Blanche which was by the same author so this should have been awesome, right? Yeah, it wasn't it was ok with some good moments. Sorry guys. It just didn't happen for me.

Honestly, Princess Madame Sprinkle irritated the hell out of me and I wanted to give her a time out or twenty. I really wanted to find her cute and precocious and I'm pretty sure that's what she was suppose to be. But, I didn't instead for me she came off as rude and if not spoiled definitely over indulged.

Benji who was Maps best friend was at times entertaining but there were other times when he made me feel like if that was the best that Maps could do for a best friend he'd be further ahead without one. I almost had the impression that Benji only hung out with him so he'd have someone to put down.

I liked Lane, a lot. He was probably the saving grace in this book for me. In spite of the fact that he was obviously suppose to be the stereotypical high school jock. Not very bright in terms of book smarts but good at sports & every one liked him, he wasn't portrayed as being full of himself or conceited, he was nice and his feelings towards Maps came through in such a sweet and tentative manner abd were largely expressed by his acceptance of Maps as he was without censure to his behaviour. Lane seemed to genuinely enjoy Maps and all his eccentricities.

Maps unfortunately was hit and miss for me. There were moments when he had me smiling and whispering things like "Aaaaahhhhh kitten." because  he was just too damned cute. Unfortunately there were also moments when I seriously wanted to smack him in the head and tell him to get a freakin' clue. One of the things that I liked the most about Maps was that he never acted or treated Lane like he wasn't smart.

I think for me it came down to the fact that at times it worked the relationships the connections and those were the moments that I enjoyed and then there were other times where I just felt like the author was trying to hard and the connections weren't happening. I have to admit though given how much I enjoyed 'Carte Blanche' I have every intention of reading more by this author.