This one really should have worked better than it did... 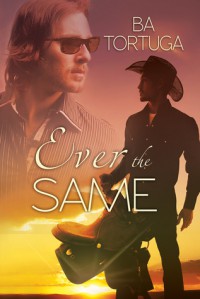 I love the elements involved in this story. We have a closeted cowboy, a tattooed, rocker boy who's lost his partner in an MVA and been blinded in said accident. Both of these men are parents to young children.

In the cowboy's (Audie) case he's the father of a little boy named Grainger. Grainger has a momma, she just couldn't get out of town fast enough once he was born. Dixon's little girl is Miranda or Randi as she's more frequently called. These men meet when Randi gives Grainger a black eye in the schoolyard and everyone gets hauled into the principal's office. (Ironically this is something I can relate to because back in the day my parents got hauled into the principals office when I gave the class bully a black-eye in the first grade).

Things started out really well and I was totally smitten with the story that was being given to me and then we hit a big stalling point because our two MCs couldn't keep their pants on. Don't get me wrong I'm down with the hot sexy times. I think it's a normal healthy part of a relationship but for me when I start rolling my eyes and skimming the pages because well...frankly...I was starting to get bored to tears because 'the boys were at it again' it really was time for the story to move on a bit, for some progress to be made in the plot.

Thankfully this did happen somewhere just past the 50% mark.  Things were getting interesting again the boys weren't having as many sexy moments but that was cool because there was stuff happening and their relationship was progressing. Sadly what I feared might happen did and that was the fact that for me the last part of the story felt like it had been sacrificed and things were cut short. I really wanted to see these guys find their way to a comfortable life together, to see where their plans had taken them and how they'd resolved some of the issues and conflicts they had to deal with. What it felt like was that I got a peek at them a glimpse that said yeah our boys are ok and they all lived HEA! and dammit! I wanted more.

Now as to the characters in this book there was Audie and his adorable son, Grainger. Audie's our closeted cowboy. He may not have a fancy college diploma or a university degree but thankfully he's got a truckload of common sense, determination.

Next we have Dixon and his equally adorable daughter, Randi. Dixon's our tattooed rocker, gone blind-guy. He's a ginger (let's hear it for the ginger), he's more of a city boy. He and Randi are both trying to figure out how to make their lives work again after the accident that took Dixon's partner and Randi's other daddy away from them. Randi's angry at the world because of all the changes in her life that have come with the loss of her daddy Ron. In spite of all this Randi's still trying really hard to be a good girl for her remaining daddy. Dixon's determined to be around to at least see Randi to adulthood he's just not sure what to do next and his biggest problem is his freakin' parents...especially his mother. On one hand she's telling him he needs to learn how to manage being blind so he can be a more functional person but on the other hand she wants to put him in a cage so he won't get hurt. Sorry, momma' in case you didn't notice he's already been about as freakin' hurt as you can get. He's lost not only his eyesight but the love of his life. What you need to do isn't keep him from being hurt it's give him the love and support he needs to go pick himself up, dust himself off and get back out there into the world.

Sadly Dixon's mom isn't the worst of what these men have to deal with...nope, I'm giving that award to Audie's mom. That woman made me want to hurl my e-reader across the room.

The garbage that came out of her mouth was heinous to say the least. Her treatment of Audie was reprehensible and then some. She made no secret of the fact that she disapproved of his being gay, the farm that Audie worked so hard on was in her name and Audie knew that he would never inherit it because...wait for it...you guessed it, he's gay so therefore it would go to Gracie and yet she still had the nerve to tell Audie that he had an obligation to the land when he told her he was leaving...really? you f*ing bitch how dare you. Also because that wasn't enough on more than one occasion she told Audie that Dixon was useless because he was blind, that he might as well have died in the accident it would have been better and at least one of those times Dixon was actually present to hear the vitriol that came out of her mouth. Ok so I think you get the picture. I has rage where Audie's mom is concerned.

In some ways this was a good read for me because the author made me feel invested in the characters. I wanted them to be together, to succeed in their relationship. I wanted Dixon to find his way in the world again and they did and he did. But too much of it happened off page for me so I felt rushed and the HEA that these two men got didn't leaving me feeling totally satisfied because I missed too much of it.

I've read a number of books by this author and compared to the books in her 'Road Trip' or 'Stormy Weather' series or 'The Release' series and standalones such as 'Old Town New', 'The Long Road Home', 'Just Like In The Movies', 'Menagerie' or 'Working Jerusalem' and some others this one for me didn't reflect the quality of story that Ms Tortuga is truly capable of. For me it was ok, what it wasn't was awesome.