This one has left me feeling totally unsettled... 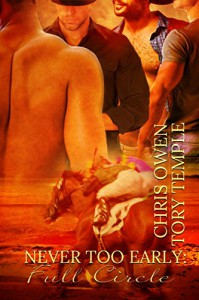 We started this adventure together and with all of our fears and anxieties about how this would go we decided there was only one way to finish it...together. So with trembling hands and anxious hearts my wonderful friends Jewel, Ele and Renee joined me in reading the final book.

Never Too Early is a collaboration between the authors Tory Temple and Chris Owen. it's a melding of two of the main characters from Tory's Firefighters series (Chance and Tucker) and Chris's Bareback series (Jake and Tor). These two authors conceived an idea that had me and I'm sure more than a few other people saying "Oh hell NO!" and I know at times I was convinced it just couldn't be done in a way that readers would accept. I freely admit I was wrong. It was done and done well. I apologize for being vague here but this is a case of I refuse to spoil it for those who haven't read it and there is very little that I can say about the story that isn't at least a little spoilerish.

I had something else all set to type now but the more I thought about it the more I realized that the last comment I posted on Ele's review basically sums up my feelings right now...

Well that's it I'm done. I'm going to need to ponder this before doing my review though. I have to admit they surprised me and it was a really good story, but still I was left feeling...I'm not even sure what I'm feeling I know it was an HEA so I should have felt good about that and been happy. I've read ménage books and I've really liked them. I don't know this was just different for me and my brain said 'this is a good thing' and my heart hurts. Maybe once I've thougth about it a little more my brain and my heart will be more in sync with each other. I have to agree with my fellow buddy readers it's worthy of 4 stars no problem. That the author's pulled this off deserves 4 stars in and of itself.