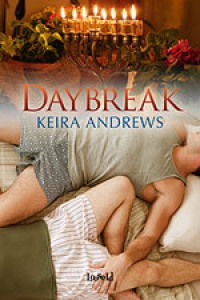 'Eight Nights' was the beginning of Lucas and Nate's story and I really enjoyed it. So much that upon discovering it's existence I immediately bought 'Daybreak' the follow-up story to 'Eight Nights'. Sadly while 'Eight Nights' got a happy 3.5 stars from me, 'Daybreak' is going on the 'read' shelf with a whopping 2 stars...barely.

So here's where things went wrong for me. Let's start with Nate's mom. I loved her in the first book. She was awesome. Sadly she went from awesome in book 1 to judgemental, self absorbed bitch in book 2. Swear to god aliens took over  her body or something. But not to worry there was a magical Christmas cure at the end...nope sorry, not buying it.

Now on to Nate and Lucas. I think I'll start with Lucas, otherwise Nate won't make a lot of sense. Lucas turned into a freaking train wreck.

Seriously...this guy went from the perfect boyfriend to Mr. Can't-keep-it-in-his-pants and as if that's not enough he suddenly became this weak willed, indecisive, idiot. At times I honestly couldn't stand him. I've said it before, but just to refresh memories. I can deal with cheating in a story if it's handled well. This was not. Lucas technically cheated on Nate once, however, there were two other instances with 2 other men that for me fell into a grey zone. I wouldn't class them as legit cheating since our MCs were for all intents and purposes finished. But Lucas was also supposedly still in love with Nate and wanting him back and trying to get him back whenever opportunity presented itself. So for me a grey area. I found it a bit skeevy that Lucas was pining away for Nate so hard but as soon as a spare penis showed up he was all over that...nope not impressed.

WOW!!! Worlds biggest dick and no I don't mean what was in his pants. He knew Lucas still loved Nate, but did that stop him from trying and succeeding at getting into Lucas's pants...hell no! And ironically the minute Lucas gets a backbone and tells him they're not going to be f*ck buddies anymore because he's not comfortable with it. Casey couldn't get out the door fast enough...yeah, you're a real pal Casey.

Last of all we have Nate. To me Nate's behaviour made no sense.

He caught Lucas cheating on him. He was mad, hurt, probably a bit confused but he ended it between them. So far he's making sense. He still loved Lucas and that makes sense too. I get it. Just because the person you love has betrayed your trust it doesn't mean that you love for them shuts off like a water tap. He gets a call telling him that Lucas has been hurt and rushes to the hospital to be with him. I get that too...still loves the guy, he knows that Lucas doesn't really have any family so of course he calls his family and his mother (who I'm still liking at this point) right away says that Lucas will stay with them to recover.

So far everything's still making sense and then randomly out of the blue and without further discussion Nate forgives Lucas. Maybe, if we'd gotten more of Nate's perspective or if Lucas's behavior had shown some real remorse about what he did but Lucas was like a magpie where penis's were concerned he was all 'oh, I'm sorry. I don't know why I did that. I never meant to hurt...oops, look a penis and it wants me.'

Even though the ending was one big happy Hanukkah miracle. I just couldn't buy it. So for me this was pretty much a fail and while I do still love 'Eight Nights' I'm kinda' wishing I had never seen the light of day.