So Scifi, still not my thing...mostly... 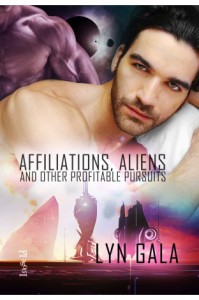 I started this series as a buddy read on GR with several friends and some of us just carried right on through to the end...the end being this one book #3 or at least it's the ending for now.

I honestly wasn't sure how I was going to feel about these books since I'm really not a big fan of Scifi...ok, maybe not a fan at all, but I am a fan of Lyn Gala and I can happily say she has not let me down. From start to finish I thoroughly enjoyed this series. The relationship between Liam and Ondry developed throughout the books and while it was in some ways comparable to  a D/s relationship at the same time there were aspects that to me seemed very different.

I think what made these books work so well for me was the way that Ms Gala gave us not just the story but the world building. It was all interwoven without big info dumps. We were given the language through Liam and Captain Susan Diallo as they interpreted things from English to Rownt or Rownt to English. We see the physical world and other characters mainly through Liam's perspective and Ondry's.

Interestingly enough one of the things that I found to be a bit annoying was also one of my favorite things about these books and that was all the explaining that happened. Yes at times it contributed to things becoming a teensy bit boring, however, this same thing was a huge contributor to the story's believability for me because there is no way that I would have bought into a story where everyone magically understood each other. I live in Canada and if you were to drop me off in the middle of Japan or Russia I would have no clue what anyone speaking anything but English was saying to me so how could I possibly believe that someone from another planet would know what was being told to them...truthfully, I couldn't. But you give me an alien race and someone who has studied their language and still has trouble translating words sometimes because there are no equivalents in one language or the other and I'm so on board with that.

Claimings was not only a series that told me a wonderful story but one that made me wonder about things. In this case I found myself wondering when and I say when because I am not so arrogant that I think earth is the only planet in a very vast universe that contains intelligent life, so I found myself wondering when we meet other intelligent life forms what impression will we make on them? I sincerely hope it's better than the one that we sometimes make on each other...person to person or even nation to nation. I don't know if big brother is watching but maybe what we need to remember is that someone could be watching and what will they think?

At the end of it all I'm still not a fan of Scifi but I am a fan of this author and this series. I would love to read more. More Liam & Ondry,more tail pulling, more intergalactic trading, more Grandmothers...just more.