Can somebody loan me the other copy of this book...you know... 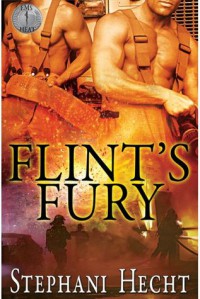 the good one, the one that was worth reading because swear to god. I got the author's rough notes and we are talking seriously rough.

Let's start with what I liked. Trust me this'll be short. I liked the cover it was pretty and those guys can carry me in a fireman's lift anyday. Also this one was short seriously, my Kobo showed it as being 54 pages and surprise, surprise I got 54 pages and not 45 with 10 pages of promo and author info. Although in this case it might have been an improvement.

Now on to what I didn't like, I warned you that the 'Like' list was short. We're done with it  and even that was a stretch. Now back to the cover. Yes, I liked it I mean come on two ogle worthy male torso's in firemen's gear what's not to like? So what didn't I like about this? There weren't really any firemen in the story it was doctors, nurses and paramedics/ambulance attendants. Nope, no firemen so to me the cover was a bit of false advertising...kidding, it just wasn't really representative of the professions that were actually in the story.

The dialogue in this story at times seemed to be beyond lame.  Seriously, I was suppose to believe that Patrick, who is a doctor, someone with the intelligence to get through medical school thought that calling his friend, Matt, a...'stubborn as mule, ox and horse who wasn't thirsty in one great, big, blond-haired ball.' was witty? Actually he supposedly thought this was a 'zinger'. I know 12 year olds who can do better. It might have sounded like more of a friendly gibe instead of a bunch of words strung together if it made some kind of sense and yes I do get that this was meant to imply that was 'incredibly' stubborn but that still in no way makes this a witty comment that should even be entered into a game of one-up-manship between two friends. It's lame. Capital L, capital A, capital M, capital E...LAME!

As for the story in general...let's start with the editing...no, wait I don't think there was any. Seriously there were random words inserted into sentences, sentences that just felt incomplete or didn't really make sense. Sorry to me that does not indicated a properly edited story. Moving on to the plot. The last time I saw something with this many holes in it, it was in the cheese department of my grocery story and said 'product of Switzerland' on it.  (oh, look, I made a witty comment). Seriously, if this story hadn't been as short as it was I would have been doing a dnf but since it was well under 100 pages and I paid real money for it I decided I was seeing it through to the end...the thankfully very brief end.

And I've saved the best for last let's talk about the heat...well, it's called EMS Heat, dammit I expect some heat...NO! There was diddly in terms of heat. One scene at the end of the book that was so poorly scripted a bucket of cold water would have done less to turn me off. It sucked and I'm not talking in a slap and tickle fun way. I'm talking in a dear lord shoot me now way.

I am officially done with this series. EMS Heat #19 Flint's Fury will definitely be on my list of '2016's Ten Worst Books'. I sincerely started this story with very low expectations and the fact that even those weren't met...forget exceeded tells me that it's time to move on with no looking back.