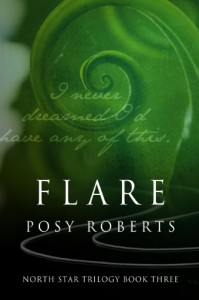 'Flare' was definitely my favorite book in this series. It seemed to have that something extra that I just wasn't quite feeling in the first couple of books. Often times in a series I find that the first book is the one that I enjoy the most with subsequent books building on it but with this series if felt more like the first two books were leading me to this one.

Before I get into what I really liked about the seriesI want to deal with that missing 1/2 star it was for the one thing in this story that really didn't work for me and that was the fact that at times and especially in the final chapter some information just felt like it was being given to me in an itemized list. Fortunately this didn't happen a lot and there was only one point at which I felt like it yanked me out of the story, hence the missing 1/2 star.

Now, here's the thing that I loved and yes there was more than one thing but this in particular is what kept me reading all 3 of these books. There's this saying that 'no man is an island' well neither is any relationship and whether we like it or not our friends, family, acquaintances, co-workers and a myriad of other outside factors can and do influence relationships. Perfect example Kevin's father. His expectations and treatment of Kevin had a very strong and lasting impact on who and how Kevin turned out to be. This was something that Kevin struggled with overcoming in all three books. Hugo's father. Again a strong and far more positive influence on who and how Hugo turned out but an irrefutable influence none the less. I loved how the trickle down effect of each character's interactions with other people  was given throughout the story. From Hugo repressing things and keeping secrets from Kevin to them as a couple dealing with their daughter being bullied we got to see how events not only shaped the character of the MCs but how they impacted their developing relationship.

As for the MCs themselves while I liked Hugo and have liked him from the start I found myself becoming seriously emotionally invested in him and liking Kevin a bit more it's not that I disliked Kevin. It was more like I was just sitting on the fence where he was concerned.

What Ms Roberts brings to her stories is real characters with depth and dimension dealing with issues that most if not everyone can relate to and understand in believable ways that don't involve magical fixes.

For me this may not have been as fantastic of a reading experience as 'Fall Into You' but it was definitely one that I enjoyed and would encourage anyone looking for a realistic romance to consider.

And just FYI there was also some smokin' hot sex going on ;-)