Another cover that deserves a bit of admiration... 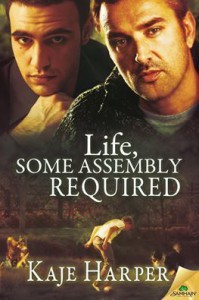 'The Rebuilding Year' introduced me to John and Ryan at the very beginning before their relationship had even started and by the end of the  book I was crazy about these two men. It was so refreshing to read a story about two mature men who behaved like mature men. Part of me was sorry when the story ended, but happily this sequel picks up where the first story ended.

My only niggle with the first book had been regarding the issue of being Bi and the implication a couple of times that 'Bi' meant 'unable to fully commit'. I said I was going to ere on the side of caution and assume that the implication was not intended and after reading 'Some Assembly Required' I'm happy to say I feel like my faith was well placed. In book 2 we saw that both John and Ryan comfortable acknowledged that they both felt they were 'bi' John having been married and in love with his wife for the better part of that marriage and Ryan having actively dated several women because he liked them and not because he was trying to fool anyone. But even better than this was the fact that the story for me became one about love. It was about two people finding each other and becoming friends and realizing that friendship was only the beginning of their relationship. That they trusted each other, loved each other and wanted to be with each other in a way that both included and surpassed friendship.

I loved that while book one focused on the development of John and Ryan's relationship amidst the challenges of day to day life and the events surrounding a mystery at the college where John works and Ryan attends classes. 'The Rebuilding Years' thankfully does not have any such mystery and I say thankfully because life for Ryan and John is crazy enough without adding any dead bodies. While John's son, Marcus, moved in with them back in the first book. John and Ryan now face the challenge of Torey wanting to live with them as well, not to mention that John's ex-wife, Cynthia, shows up unexpectedly with Torey and a whole suitcase full of her own problems. As if this isn't enough Ryan has his own family problems that are also demanding some of the precious little amount of time, patience and attention that these two men have remaining at their disposal.

There were so many things in this story that tugged at my heart and yes, I did need a couple of tissues to get through some rough spots and now we use the spoiler tags because if you haven't read it, I don't want to ruin things for you.

John's ex-wife from start to finish I do not like this woman. How someone can be a good mother and still spew the crap out of their mouth that she does is beyond me. I hope that if Torey ever does tell her mom that she 'likes girls' Cynthia has the good grace to realize the damage that her homophobic rantings have done to their relationship. She may not have known that either of her children were anything other than 'hetero' but when you have children the one thing that life has taught me, is that what you say today can easily come back to bite you in the ass tomorrow.

Also the fact that Cynthia seemed to feel that it was so unreasonable of Ryan not to like her...really? Well guess what princess I don't like you either and as for Brandon, husband #2 well...that man is a waste of space and that's all the time he gets from me. That John had as much patience as he did with Cynthia was a testament either to his patience or I was beginning to think his gullibility, thankfully the scene at the end where he refused to let Cynthia put his name on the baby's birth certificate decided things for me. John telling her in no uncertain terms that Ryan was his priority...be still my heart...*sighs happily*.

One of my other ranty, pass the tissue moments involved Ryan's family. Specifically his father. it was at Brent's wedding when Anne stood up to her parents and insisted that she wanted Ryan and John there. I already knew I liked Drew and his wife and was pretty sure that I could add Anne to that list. But when Brent failed to stand up for either his wife or his brother he simply confirmed what I already knew that he was a prize jerk. The fact that Ryan and Brent's father stood there and said nothing allowing Ryan to be treated in such a manner broke my heart and the excuses given by Ryan's dad to him later cut no slack with me. The choice their father made in that moment was wrong and no amount of justifying will ever make me feel differently.

My first book that I read by this author was 'Sole Support' and it was a nice read, I enjoyed it very much but with 'The Rebuilding Year' and 'Life, Some Assembly Required' Kaje Harper has firmly convince me of her talent as an author and I look forward to discovering all the other wonderful stories that she has to tell.