ARC Review - Only Say the Word 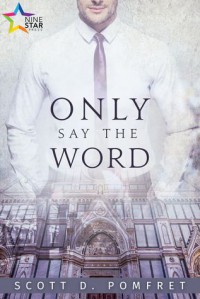 For me ‘Only Say the Word’ was another step outside of my comfort zone. I tend to avoid books with a religious based theme but the premise behind this one intrigued me and I decided that I wanted to give this one a chance because I’ve read some books by this author and while one of them wasn’t my cuppa’ the other two that I read were really good and I enjoyed them. So I guess you could say I took a leap of faith and in some ways I was rewarded because I honestly feel that this author has some crazy, mad writing skills.

While the story ended up not being my thing I can truly say that if the quality of the writing hadn’t been as good as I found it to be there’s no way I would have been able to get through this book. I had some very visceral, gut reactions to some of the events and characters. There were times I just wanted to rage against things that were happening in this story.

‘Only Say the Word’ is not a light fluffy, fun romance by any means. Essentially there is very little romance and sex and what there is, is more off page than on. I found that this story dealt with several issues the largest of them being how one man’s question of faith and whether or not he could reconcile it with who he was and wanted to be came to affect not just him and his personal relationships but an entire community. At the heart of the story is Colm Flaherty a successful, young lawyer. Who while he doesn’t necessarily advertise his sexuality neither does he hide it. But Colm is also Catholic and his religion means a lot to him so needless to say this has also left him questioning his faith and feeling conflicted about a lot of things.

One of the aspects of this story that I probably enjoyed the least was that it was told from the point of view (POV) of roughly 10 different characters and while there were times that I did wonder if it was necessary to have that many POVs in the story I have to admit the author handled this relatively well. I was never confused as to whose POV I was reading because it was done by dedicating each chapter to a particular character’s POV and giving the date and the character’s name at the beginning of the chapter.

In spite of the fact that I went into reading this knowing that it was very strongly based around religion I have to admit that I was still not prepared for just how strong that focus was and this was definitely another contributing factor to me not enjoying this book as much as I had hoped too.

More than any kind of a romantic love story ‘Just Say the Word’ is a statement of our times and the challenges faced not just by the LGBTQ community but by all individuals at some time in their lives to look at who they are, what they believe and reconcile that with the world around them. Colm was by no means the only person in this story having to face this conflict.

Colm's partner Sandy Plunkett as a result of what happened to Colm was forced to deal with the reality of their relationship. Addressing the issue of what he believed, what the world saw and what was. Somewhere in this mix was the answer to Sandy’s internal conflict. Next there was Jack Faley, who was also, for me, one of the most fascinating characters in this story a Franciscan monk whose entire life and being was devoted to finding answers to his personal conflicts and those of others. This was not a story lacking in interesting characters with depth and dimension if anything at times there may have been too many of them.

‘Only Say the World’ is a journey into the darker side of faith and what happens when one man’s personal conflict spills out onto the rest of the world. At the end of it all I found that this was a far more somber caricature of the world I live in than I was comfortable with and while it's not something that I want as a daily part of my reading diet. I find that sometimes it's good to step outside of the box and view things from a different perspective and maybe gain a better appreciation for what is over what was, will be or could be.