A beautiful cover for an amazing story... 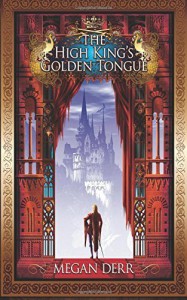 'The High King's Golden Tongue' started out as a story back in 2012 in the M/M Romance Groups 'Love is Always Write' event on GoodReads and I read the story way back when and then at some point for whatever reason I know not, nor do I really care, why the author made the decision to expand the story into a book. Initially I have to admit I was a little apprehensive because I was concerned that it would feel too repetitive and I'd get bored and end up not liking the story as much as I had but when I saw that it had gone from 41 pages to well over 200, 277 to be exact. I was confident this could not possibly be the case and thankfully I was not disappointed.

I love fantasy, it's one of my favorite genres but I am also really fussy about who I read in this genre. I've read a few fantasy novels over the past while and they've been good and I really enjoyed them but this book for me went way beyond 'it's been good and I really enjoyed it'. From the very first page...no wait from the cover because have you looked at that cover? It's gorgeous and such a perfect visual to this story and damn, did it ever do it's job. One look at that cover and I was drawn in and with each word I just wanted to go further and further into this story.

But I'm going to just take a minute here to chat about book covers because we all know book covers are important, oh we can say they don't matter. Hell, I've said it numerous times and maybe to some they don't but truth of the matter is that cover is the authors initial shot at grabbing the readers attention, of making not only a first impression but a lasting one and in that department this cover nailed it and then I started reading the book...

I loved the richness of the descriptions and the way the story just flowed. I am admittedly one of those people that can become easily bored with overly descriptive books...didn't happen. I was anything but bored my mind was busy painting pictures and creating visual images and rolling into production of the mental movie that a well crafted story can effortlessly bring to mind.

For me this story had it all. I found myself so enchanted with Prince Allen. Aside from the fact that he was obviously one smart dude. I mean seriously 14 languages? I always feel impressed with myself if I can keep a grasp on one...English, the one I'm suppose to know...now, back to Prince Allen and why I liked him.  I never felt that he was conceited or arrogant about his ridiculously impressive linguistic skills or his station in life as a prince. For me his viewpoint was simply realistic he spent years being taught these things and so to him it only made sense that he would know them and he was incredibly brave and determined, I loved how he treated everyone with courtesy and respect but at the same time he didn't come off as being a pushover or perfect. He had flaws and insecurities just like any normal person.

High King Sarrica was simply a larger than life character and I liked him. I liked that he had Lesto to keep him in check along with Rene. These two were the brothers of his deceased husband Nyal as well as Sarrica's friends and they were the type of friends who told him what he needed to hear which wasn't necessarily what he wanted to hear. Many of the humorous moments in the story came from conversations between Sarrica and Lesto and/or Rene.

The relationship that developed between Allen and Sarrica was to say the least extremely slow in happening but given the events of the story it would have seemed incredibly contrived for things to have moved any faster than they did in the romance department and if you're a fan of the sexy times...well you might be a little disappointed here because there's not much happening in that department until later in the book but all I can say is when it did finally happen my e-reader was smokin'.

Now, if you're a fan of stories that grab you, hold on to you and take you to places you've never been or could never imagine going to...you will not be disappointed with this story and if you've already read the short story trust me it's like the teaser for this book there is so much more to find out and if you still need more, as I apparently do well than you can scoot off to an e-book store in just a few days and get yourself even more when book #2 The Pirates of Fathoms Deep is released for sale in just 6 more sleeps ;)