I like hot, sexy and steamy romance as much as the next person but... 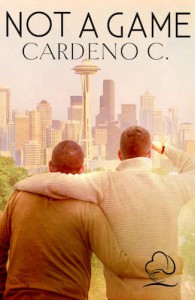 Oliver has accepted a job with the 'best boutique game developer in the country' and he sees this as his chance to re-invent himself. Starting in the bedroom. At six foot two inches and 290 pounds he's pretty sure he's not anyone's fantasy man. But then again he's never met Jaime. Jamie is definitely the image of a walking wet dream but he's not looking for his mirror image. Jaime's looking for a man who pushes all his buttons both in and out of the bedroom and one look at Oliver tells him that he may have found his man. Now if he could just convince Oliver that what he sees when he looks at him is everything that he wants and just the way he wants it. They could both have what they want...someone to share their lives with.

There was so much about this book that I enjoyed. Starting with this cover. It's perfect...seriously those two men are Jaime and Oliver. They're just missing their dogs.

Oliver may have been shy and insecure but he was also kind, considerate and thoughtful as was Jaime. I loved how they treated each other. They communicated as adults things were talked about, questions were asked, answers were given. That Jaime valued Oliver for who he was and how he was. He never tried to get Oliver to change or be different than he was. He did want Oliver to have more self confidence and a stronger sense of self worth, but truthfully if the person I loved saw that my self esteem and self worth weren't good and he didn't want to help me believe in myself...well, I'd have to wonder if maybe I wasn't with the wrong person.

Oliver totally melted me when he would put on his big boy britches and step outside of his comfort zone and do things because he'd realize how much it would mean to Jaime. To me that's love right there when you put the happiness of someone else above your wants and your needs. You can give them all the fancy stuff in the world it will never say 'I love you' the way that does and the sense of pride that radiated from Jaime at just the thought of being with Oliver of sharing a life with him...damn, I could seriously feel that coming off the pages.

On top of the awesomeness that was Oliver and Jaime there were other characters in this book that I really liked. Oliver's co-worker and friend Tamra. She was sassy and feisty and I like that she encouraged Oliver to go for it with Jaime. Then there was Jack. Jaime's ex, his business partner and still good friend. I'd love a story about him because he was every bit as awesome as Jaime and I really want him to have someone to love.

Now as for the ending of this book...what can I say...except that I loved it, it was perfect and I totally understand why this author is such a favorite with some of my friends. I still haven't read as many of her books as I would like to but I'll just keep working on that.

'Not a Game' is a wonderful, light, feel good read for anyone who doubts that love is the one thing that comes in all sizes and shapes because it's not the package that matters but the heart and soul that resides within.

An ARC of 'Not a Game' was graciously provided by the author in exchange for an honest review.