Come to Canada...we has dragons!!! 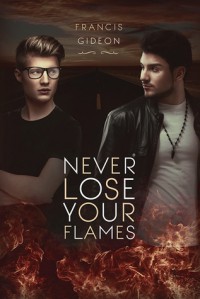 Canada!!! Ohmy!!! Sign me up. Yep, I read the blurb on this one and nothing was going to keep me from reading. Canada folks my home country and there's a dragon and fairies, a motorcycle race with a gargoyle and let us not forget a pair of awesome kickass women and the Oracle...no wait him I'd like to forget...meh, every story has one but still there's just so much magical, mystical goodness. How could I not want to read this? Of course I did.

I loved this one it was like reading an updated fairy tale only better. You see once upon a time there was this dude named Gabe, Gabriel actually but don't call him that he hates it. Anyways Gabe is a former cop turned bounty hunter and for how that happened you'll need to read the book. So Gabe's chilling at this underground concert one night sees this hot looking dude named Nat and I do mean hot turns out Nat's a firestarter as in 'snap flames' and just when Gabe and Nat are about to find a little privacy and get their groove on Gabe gets a call from Duke, his boss. Duke needs him to do a job...do you see where this is going? Yep, right down the drain as Gabe puts two and two together and comes up with 'Oh f*@k' while he's watching his motorcycle his beloved Harley Davidson Cruiser ride off  into the sunset without him but not without his latest assignment...the firestarter that he's suppose to track down.

Now I have to admit I was a little nervous because while this had the potential to be an amazingly fun story it could have also gone horribly wrong. Luckily for me anyways, it didn't, from start to finish I was incredibly entertained. I loved Gabe but then really how can you not love someone who can change into a huge black dragon and destroy half of Canada in a rage...the lesson here folks is 'don't piss off the dragon'. There's more to it than that but again you'll need to read the book. Nat...oh, lordie Nat is the sweetest thing ever and somehow he got stuck with Atticus for a brother and in the life lottery that translates to the shortest stick ever.

Aside from Atticus and The Oracle there are so many amazingly colorful characters in this book there's Tansy, she's a 13th level witch. Trust me when I tell you that means she's scary powerful and she's Gabe's friend, there's Imogen, she's Tansy's partner and human but don't let that fool you she's still really kick-ass, there are the elemental children, Beatrix Jane and Duke he's Gabe's boss and a bit of an enigma.

Granted this story is not exactly set in the Canada that I know and love. There really haven't been any dragon's go on a rampage destroying half the country. But Saskatoon is still here as are Winnipeg, Regina, Alberta really does have a section known as the badlands and we do get the occasional forest fire.

My only minor disappointment is I would have liked Gabe and Nat to have a bit more sexy time but when you read the story it's hard not to wonder how the hell that could realistically happen with all that they had going on, so for me this was a minor disappointment at best that was well compensated for by the overall enjoyment that I had while reading this story.

I could probably go on and on about this story it was just that enjoyable for me but what I don't want to do is give away anything that's going to spoil the enjoyment for anyone else. So I'm going to stop here and just say if you're interested in a trip to Canada that offers fun, excitement and a few surprises you need to stop right here and give this one a try.

An ARC of 'Never Lose Your Flames' was graciously provided by the publisher in exchange for an honest review.