The world is black, the world is white It turns by day and then by night... 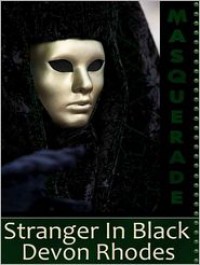 Christian has been in love with Carl since their university days and when he suddenly finds Carl back in his life he realizes that his feelings have never truly died. Eventually their relationship resume between them and Christian tries to convince himself that everything's good but eventually he realizes that he has unwittingly become Carl's dirty little secret and Christian knows that his dirty little secret days are done.

Determined to end things and move on Christian hatches a plan to attend a masquerade party with his friend David and catch Carl in the act. Things become complicated when it turns out that Carl’s got a fiancée and Christian finds himself drawn to her friend, Jarrod, who’s there to help her put an end to Carl’s cheating ways.

In spite of the fact that I had to do a serious suspension of belief for some of this story I found it to be an entertaining and enjoyable read. While I was ok with what Christian did, dressing up to attend the masquerade ball and catch Carl in the act so to speak because he wanted to give himself closure and felt that seeing what he knew to be true would help him make the break he needed worked for me. While Mira, Carl's fiancée  wanting to meet Christian so that she could tell her (Mira was under the mistaken idea that Chris was short for Christine not Christian) to stay away from her man because she loved him and intends on marrying him despite his infidelities. Really? Have you no self respect, MIra? You need to kick his ass to the curb. You haven't even married him yet and he can't keep it in his pants. Do you honestly think he'll change his cheating ways? I think not. I liked Mira she was a strong, independent and successful woman until it came to Carl...oh well, they do say love is blind.

As well as Mira's 'it's ok to cheat on me' attitude there was a part of the ending that I did find a bit hard to swallow and it definitely took away from my enjoyment of the story, however, since it was part of the ending I'm reluctant to give details and truth be told my issues aren't everyone else's, so it may not bother others who choose to read the book.

More importantly what did I like...well, I liked Christian's friend David. I liked the fact that as a heterosexual male he was comfortable with admitting that Christian in drag was hot. I liked that ultimately Mira did what was right for her and most of all I liked Christian and Jarrod together. They were a good pairing and I'd love more about them and where their relationship goes.

An ARC of 'Stranger In Black' was graciously provided by the author in exchange for an honest review.