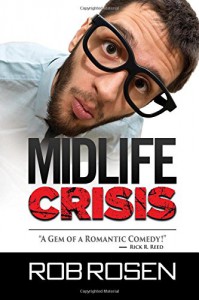 Like walking in the rain and the snow
When there's nowhere to go
And you're feelin' like a part of you is dying
And you're looking for the answer in his eyes.
You think you're gonna break up
Then he says he wants to make up.

The Things We Do For Love

by 10 CC (with a little editing from me)

Sometimes when I'm reading a book things just pop into my brain randomly and 10CC's song 'The Things We Do For Love' was one such thing as I read this book. I haven't read a lot by Rob Rosen but I have to admit I'm glad this was one of them.

'Midlife Crisis' was both a mystery and a romance with a lot of tongue-in-cheek humor thrown in. Jack is 35 years old and his latest relationship has just ended so he's having a bit of a pity party when his friend Monroe stops by for some Coke (of the cola variety) and to dispense a bit of sage advice in the form of a walk down the memory lane of Jack's love life which culminates with the memory of Jack's first love who of course was also the one that got away...Bing O'Malley (hey, I did not name this guy, sadly someone thought his parents should be allowed to. What the hell, it worked for Bing Crosby, right?). It's with a great deal of determination that Jack decides to go back to his hometown of Ono, California and yes, it is pronounce oh-no! trust me it's appropriate. This is where his search for Bing and in many ways his journey to get his own life back on track begins.

While Jack may have been the main character in this story he definitely was not the only 'character' there was Jack's mother and his father but especially his mom. She was one unique individual, Chompers the dog, David the hospital nurse and former high school bully who it turns out was more in the closet than bully, there was of course Bing, Monroe and his husband Paul, and just for good measure lets add in a host of small town characters and more twist and turns than a piece of abstract art.

I loved that like most of us Jack's hindsight was considerably better than his foresight and he was fully aware of this and like most of us it was more than a little annoying at times.

I'm not really sure how to explain the humor in this book, it was quirky and at times it was even a bit lame but in a rather entertaining way. It just really, really worked for me. I was totally entertained and amused from start to finish and yet there were a couple of things that didn't work too well for me and honestly I'm not going to delve into them because in the overall scheme of things they didn't spoil the book for me or take away from the entertainment factor so really not worth spending any time on. 'Midlife Crisis' is however, worth considering if you're looking for a romantic, mystery that tends to poke at life and love with a very tongue-in-cheek and totally irreverent attitude.

A copy of 'Midlife Crisis' was graciously provided by the author in exchange for an honest review.