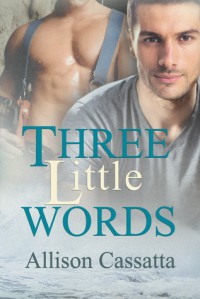 Yep, those are my 3 little words I was hoping for something more but 'I liked it' is as good as it got for me on this one.

After spending 3 weeks working out of town Matt returns to the home that he's shared with Brandon the man he loves, shares his life with and hopes to marry one day only to discover is dog, Zeus out in the back yard and a 'Dear John' letter on the dresser...ok, can we just stop here so I can say 'Brandon, really? A Dear John letter? You've been with this man for 5ish years and he goes out of town to work so he can give you all the nice things he thinks you deserve and this is how you end it with him with a pitiful letter written on paper from a legal pad, not even nice stationary and the last thing you tell him in your letter is 'I love you, I'll always love you.' Can I just say 'dude you have got one hell of a way of showing love.

Anyways, at this point I like Matt. I felt really bad for him. He seemed like a really sweet guy and damn, he just did not deserve this. But go Matt, he pulls on his big boy pants and decides to head out to New England do some lobster fishing for his brother, get his head on straight. Ok so now I'm maybe crushing on Matt a little because hey, sweet guy adores his mom, always brownie points for that with me. Puts everything into storage and his best friend Luke (remember this name, it's important) offers to take care of Zeus so that he'll have a yard to play in...did I mention that Zeus is a pit bull that Matt rescued from the animal shelter, yep, Matt's racking up those brownie points like nobodies business with me.

Every thing is done, taken care of so it's time to hit the road. Easy, peasy right? Well it would have been if Luke hadn't decided to kiss Matt good-bye only Luke was hoping it would turn into a 'hell yeah, I'll stay' because unbeknownst to Matt, Luke's been in love with him for years. Now, is anybody besides me totally on board for this? It's going to be awesome right? Oh, I forgot to mention Luke's a firefighter...yep, I'm hooked sign me up.

Ok, so here's where things detoured for me. Somewhere on the ride to New England Matt shifted from this adorable but heartbroken guy, who walked away from his best friend because he knew he had to get his head on straight before getting involved with anyone else, especially the one person he'd loved for the past 20 years. So far so good still because while he loved Luke in his heart he'd always believed this to be unrequited because Luke was straight  as far as he knew so he truly loved Brandon and and was committed to making a life for with him. Anyways, somewhere along the line Matt seemed to change for me. He became wishy washy and self-absorbed with a bit of whiny thrown in. I was really starting to not like him. Add in the fact that he'd barely arrived in New England and he's calling a guy who gave him his business card when they met very briefly at the hotel where Matt stopped to get some rest for a night. This for me was so not cool and I just couldn't rectify it with someone who's trying to get over the end of a 5 year long relationship while finding out that the person he's crushed on an ultimately loved for 20 years isn't beyond his reach and they could have a chance at a life together...nope, just not seeing it.

But skipping ahead a bit, Matt goes out lobster fishing on his brother's boat and honestly this part of the story was pretty good. I liked it and Matt seemed to be getting back on track a bit. They've barely returned to shore when Matt's mom phones to let him know that Luke has been hurt. Needless to say Matt goes home ASAP and things start to improve for me. I like Matt and Luke together, they really work. While the relationship moved a bit faster than I would have liked. I was still ok with it and I liked the ending that Matt and Luke were given.

Matt was loving and supportive and he adored Luke always had and was determined to make things work for them and Luke loves Matt every bit as much. He was mostly afraid of how his parents would react to finding out their son was gay because of course they were oober religious. But in the end it was his love for Matt and his desire to be with him that won out so for the most part I liked what the author did with this part of the story, it worked for me.

While the main story was about Matt and Luke there was also a lot of stuff happening on the periphery and none of it really got resolved, in fact some of it just seemed to vanish leaving me wondering why it was ever included to begin with and in the end this also took away from my overall enjoyment of the book.

In the end 'Three Little Words' was an ok read for me and I liked it well enough but it just didn't quite have what I needed to make it an 'I love it' book.

Note:  The copy of this book that I received to review is a second edition and while I didn't read the first release based on reviews done by those who did it seemed to me that some of the inconsistencies mentioned as part of the first edition appeared to have been corrected so kudos to the author for this and for the lovely new cover.