Damned age gaps they get me every time... 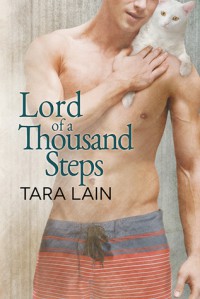 I'm going to start with the elephant in the room here...that's right we have an age gap and for me it's outside of my comfort zone. I'm ok with anything between 5  and 10 years more than that and I start to squirm. This one comes in at around 14/15 years and maybe if the younger MC was 25 or older it wouldn't have bothered me as much but we've got a 21 year old while our other MC is in the 34/35 range. Yeah that's me squirming in my chair but dammit, this is book 4 and I've read the first 3 books so what's a girl to do? You guessed it I squirmed in my chair as I dove in and read this one.

What really saved this one for me was that I ended up liking both of the MCs a lot. Ian Carney is the younger brother of Jim Carney from book #2 so we have met him before along with his rather interesting cat, Anderson Cooper and his p-o-s boyfriend who wanders off to Mexico so fortunately for all concerned Rico doesn't get much in the way of page time.

Braden for me is a new character as I don't remember him from any of the previous books. He's 35 and ending a marriage of 15 years after finally acknowledging that he's gay. Braden has two children 14 year old JoJo (short for Joseph) and the very adorable and overly precocious 5 year old Mireille. Braden adores his kids and they mean the world to him, there's nothing he wouldn't do to keep them safe and be with them...you guessed it big time brownie points being awarded here. Braden is also very drawn to Ian and because of his own situation and the fact that Ian is considerably younger he tries not to act on his attraction to the younger man.

At first both Braden and Ian try to ignore their growing attraction to one another by attempting to build a friendship but time and circumstances conspire to break down barriers and resistance until eventually neither of these men are able to pretend that they don't want what they truly want and that's each other and as in real life just wanting something doesn't mean we get it. There are misunderstandings and obstacles...such as ex-wives who should have never been. Interestingly I found that the fact that it was Ian who initiated the intimacy between him and Braden made a huge difference for me in my changing perception of the relationship and the fact that towards the end I was mostly ok with this pairing.

I'm pretty sure that somewhere in all this I really wanted to hook Ian's ex up with Braden's ex. I care not that Rico was gay these two so called human beings deserved each other. I believe it's called getting your just deserts.

While there were some new characters in this story none of them really caught my attention or interest. However, it was fun to see Jim and Ken and even Shaz, Billy, Ru and Gray put in an appearance. I love reading series where MCs from previous books show up it especially when they are all friends it seems more natural and adds to the believe-ability of the overall story line.

I was more than a little surprised by the end of this story to realize that I liked Braden and Ian as a couple and that in spite of the age difference I could see the relationship working. Was I still bothered by the age difference...a little bit but not nearly as much as I had been originally. Overall this was a really sweet feel good book with some adorable and heartwarming moments and in spite of my age difference issue I enjoyed it and definitely recommend it to anyone wanting to read a nice, surprisingly low angst romance story.

An ARC of "Lord of a Thousand Steps" was graciously provided by the publisher in exchange for an honest review.