In the world of fashion Miles Brodeur is king... 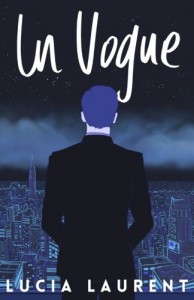 As Editor-In-Chief of Couture Magazine Miles is the driving force behind the fashion industry. Careers can be made or destroyed on  his whims. Miles lives for fashion. Years of dedication and hard work have placed him at the top of the fashion scene along with Zia his best friend and Couture's creative editor. Miles rules his world down to the last detail. He's in total control and it's not until he meets former model turned fashion editor Alexander Mackenzie that things begin to change.

While their first meeting is only a brief conversation at an event Alexander's presence stays with Miles. Alexander unlike Miles may love his job but he knows there's more to life than the world of fashion and he wants it all. For Alexander the idea of happiness and success includes gaining the attention of one Miles Brodeur.

If the world of fashion is your thing than I highly recommend this book. While I liked the overall story for me there was some hit and miss about it. So I'm going to start with the miss parts.

To begin with Miles had his moments where he honestly just annoyed me. I understand that he was a highly successful editor of a magazine that essentially is the fashion worlds bible and that in the publishing world he is extremely influential. I needed for him to be less arrogant and at times just downright less superficial and vain (cue Carly Simon please), I can appreciate confidence in a person and the times when that was the impression that I got of him that he was a man who was driven and confident in his ability to succeed, those were the times that I liked him.

Now let's talk fashion...no, seriously I mean fashion, roughly the first half of this book was for me a huge who's who of designers and maybe if I'd had my computer handy so that I could google some of this stuff and have more of a visual as to the general look and image that these designers create I would have liked this more but honestly if haute couture designs were what I was after I would have gone looking for some copies of Elle, In Style, Vogue, Marie Claire or Harper's Bazaar. For me sometimes less is more and part way into reading this the designer name and description of every piece of clothing and accessory worn by pretty much everyone was boring...sorry, that's the only word I have for it...B-O-R-I-N-G! I actually got excited over the fact that someone was going commando because hey I got to skip an underwear description, I think the men were pretty well all wearing Calvin Klein if you're wondering.

I'm also going to mention that this book was written from a third person POV and while I have to admit it's not really a favorite perspective of mine, neither is it a deal breaker and admittedly I was a little thrown by it in the beginning but once I'd settled in to reading the story I was ok with it and I didn't find that it took anything away from the book for me. So not a dislike but I'm not sure I'd put it on my like list either, let's deem it a non-issue where I'm concerned and leave it at that.

Now onto what I enjoyed...

I enjoy the parts about fashion week in New York, England, although on behalf of the English I am offended that Miles didn't feel that England was worthy of his attention even though he actually dedicated an edition of Couture to British pop culture...oh, wait I forgot that's because Alexander was English and oh yeah, let's not forget fashion week in Paris and Milan because they were fun too.

While I'm not going to go into the details because I'm truly not looking to spoil this for anyone there was also another part of the story that pertained to Miles that sadly for me got over done as well and I reached a point where again my brain was saying "Sorry, I give no f*cks about  you anymore can we please move on."

I guess really in a nutshell what it came down to for me the reason that this wasn't the 5 star read that it seemed to be for so many others was the fact that some parts were just too much, to over done too drawn out...sometimes less is more and in these parts that's what I needed less of them and more of other things like maybe the relationship between Miles and Alexander and their friends. The overall dynamics between Miles and Zia and Alexander, Dylan and Kane were good and the five of them as a group was definitely worthy of more page time in general.

So let's move on to what worked well, first off Miles worked for me as I said not always but when he did I really liked him. He had moments of wit and charm and in his professional life he was definitely a very confident man and I liked that about him when it came through.

Next Zia, truly he was an epic character and I would honestly love a book about him because I have the feeling Zia's story could be superb.  Zia was a bit of a queen at times, he was outspoken, outgoing and just slightly outrageous in general and definitely relationship-phobic tell me you don't want to know what-up-with-that?

Alexander Mackenzie was perfect...but not and I really, really liked him. He's attractive and sexy, confident but not arrogant. I felt like he was a really good balance for Miles and as a couple they worked well in my mind. He knew what he wanted and he wasn't afraid to go after it...or at least he wasn't once his friends Kane and Dylan remind him of all he has to offer and that brings us to Kane and Dylan. We get enough of a peek at these two characters to convince me that they also have stories that need to be told. Especially Kane...I love Kane, he cares not about fashion...Kane's a DJ while Dylan's thing is sports...yes, these two men were like a breath of fresh air.

'In Vogue' is Ms Laurent's first venture in writing and while it definitely had moments for me that were a bit lackluster...I also felt like there were sparks of talent and promise there as well. So 3.5 shining stars for an author with the potential to gift us with 5 shining stars and more.

A copy of 'In Vogue' was received from the publisher in exchange for an honest review.