Because Dani told me too... 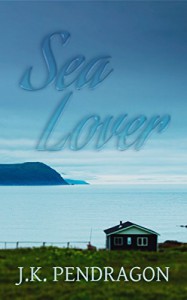 That's right I read this because my friend Dani told me too and I trust Dani. She's good at picking up on what her friends like and don't like. So she told me about this one and first off it's set in Canada well I'm Canadian so it's a given that this little detail will pique my interest and there's a merman...that was it for me I was hooked. Vampires and werewolves are kind of a take or leave it scenario for me but give me a dragon or a merman, shape shifting possums, a hot gargoyle of two and sign me up.

'Sea Lover' is set on Canada's east coast which is not only some of the most beautiful scenery that you will find in this country but some of the nicest, friendliest people live there as well...so it's no wonder that Ian moved there when he felt like he was drowning in his old life. Ian's made himself a comfortable life in a small town working as a fisherman. He's got a little cottage to call home and life's quiet and pretty laid back for him. He's comfortable with things the way they are or at least he was until the day he found a wounded merman on the beach. He doesn't really give a lot of thought to what's happening as he rushes to take care of the merman abandoning his fishing net and gear on the beach to care for the injured merman and to safeguard his privacy because Ian's no stranger when it comes to keeping secrets. He's got his own secret that he's worked hard to keep.

I was surprised by the way the author crafted this story. I know I've said this before and at the risk of being repetitive I'm going to say it again, "A story doesn't have to be realistic for me to enjoy it. It just has to be told to me in a believable way." and for me the author totally nailed it on this one.

The story on the surface is about a merman and a human but the story that I found underneath was about two people both of them unique in their own special way and both of them able to accept the differences of each other as just part of who they are allowing them to find someone they could be friends with and ultimately fall in love with.

This was my first time reading something by this author, so color me impressed because I doubt it will be my last.

An ARC of 'Sea Lover' was graciously provided by the publisher through Net Galley in exchange for an honest review.