I'm just not sure how this happened... 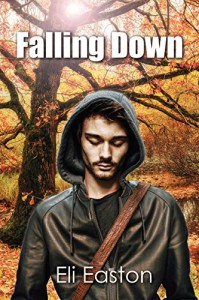 I have to admit even I think this one's a case of it's me. I was all set to love this story. It had the makings of one that would take me apart and then put me back together again and I'm truthfully not sure why it didn't happen that way.

Josh tugged at my heartstrings and I felt for him. Losing his mom so suddenly and unexpectedly. Not really having anyone who seemed to care enough to see how much this affected him. Seriously I have to admit I was at a loss as to how the hell this would happen and sadly I know it does. People fall through the cracks in real life too and that's what happened with Josh. The only person who he felt truly understood and cared for him was ripped from his life and there was no safety net for him. I should have been in tears at this point and yet I wasn't and still I'm not sure why.

And then there's Mark. He's basically hiding from the world in a cabin in the woods. Mark's been hiding his whole life. Too afraid of losing the love of his family to share with them who he really is. Running off to join the marines rather than deal with the fallout of telling his family he's gay. Fighting off the nightmares of his time in Afghanistan on his own, not allowing anyone to see his pain.

In spite of all this Mark for me came across as a survivor. Someone who refused to give in or give up and thank heavens for this because he was just what Josh needed. Someone who would care enough for Josh to get him through a time when he wasn't caring enough for himself.

Add to all this some fabulous secondary characters Mrs. Fisher the elderly lady whose house Mark and Josh are painting, she was simply adorable and I loved how she made them lunch everyday. I've known more than a few little old ladies who she reminds me of. Mark's family, he may have been unsure of them but the fact that they were right there for him when he needed them tells me volumes about what kind of family they were. The police officer who did his job when Mark needed him to and did it without passing judgement was for me a breath of fresh air, after having read a book or two with secondary characters in it who were douchebag cops and individuals in general.

Seriously, how could this not be an absolute win for me. This is the stuff that I thrive on in a story. So the best that I can say is I got nothing? No, real idea as to why this was just good and not amazing. I got what should have been an awesome story by an author who has without fail impressed me every time I read her books. I can't even say that this one failed I liked it it was good. I just didn't make that connection that tugged at my heart and brought tears to my eyes and trust me those moments were there...or at least they should have been.

So, I honestly say without a doubt it's not the story it was me. Seriously read the blurb and if this is your thing read this book because I truly think chances are you'll like it...no, you'll probably love it. Eli Easton is amazing with words and she's created a beautiful story here that most people have loved. I just fell into the minority on this one. Does it mean I won't read more books by this author...Oh hell no! One disconnect does not a bad story make.

An ARC of "Falling Down" was graciously provided by the author in exchange for an honest review.