A new series from an established author... 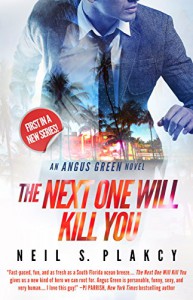 'The Next One Will Kill You' was my first time reading this author and while it wasn't quite what I was expecting I definitely enjoyed this book and look forward to reading more.

Angus Green is new to the FBI and so far he's spent most of his time behind a desk analyzing data. Things change rather quickly for  him when a couple of fellow agents approach him at 'Lazy Dicks' the local gay bar where he's entered into a strip trivia contest in the hopes of winning money for his little brother's trip to Italy. Angus isn't sure if this is going to be the beginning or the end of his career as an FBI agent. He's always been out so being gay isn't a secret...nope his concern is that entering a strip trivia contest even though he won and got to keep some of his clothes on might not go over well with the powers that be at the FBI. Much to his relief it's being gay that has put him on the radar of his fellow agents who are in need of his assistance.

Angus suddenly goes from being a desk jockey to an active field agent in a matter of minutes, life is getting busy and while he does make mistakes...gasp! He learns from them and digs his heels in and works all the harder.

Add to this that Daniel, his brother...his younger brother and only remaining family seems to be finding himself in some hot water and while Angus wants to go to his rescue it's just not humanly possible and Angus's roommate, Jonas, seems to be having a life crisis (we're not calling it mid-life because really? Way too young), then there's Lester, the hot and sexy doorman that Angus meets while following up on a lead.  They're not a couple yet, but Angus seems to spend a bit more time than necessary investigating Lester and I'm pretty sure it's not case related. Also be prepared for a lot of secondary characters in this story some of them do become more relevant than others but seriously folks we've got an FBI agent investigating a case and having him interact with a small number of people just wouldn't have seemed very realistic for me.

While I would have liked a little more story in the romance department I can be patient...after all this is only the first book and I'm good with a slow burn and given how busy Angus is at the moment it makes sense that anything in the relationship department is going to take a bit of time.

Following Angus as he worked his case and entertaining for me. The details were pretty much perfect enough to let me work the case with him but not so much that I became bored. Plus there were lovely moments of snark and banter between Angus and his colleagues that I thoroughly enjoyed...

I slumped back in my chair. “I thought I was getting fired.”
“Yeah, that was kind of fun to watch,” Vito said.
I glared at him. “You’re going to mentor me, you might try being nicer.”
“Niceness is not Vito’s specialty,” Roly said.

Also before I forget I just want to say that while I don't factor this in to my rating covers matter for me and I really liked this one...I mean it's good seriously good and if you like it before you read the book take another look after reading the book and it'll work even more for you.

'The Next One Will Kill You' was a well written and enjoyable start to a new series by a well known and established author and I look forward to following this series and maybe, I'll even get a chance to dig into his backlist and see what other treasures I've been missing.

An ARC of "The Next One Will Kill You" was graciously provided by the publisher via Net Galley in exchange for an honest review.