A Barista walks into a bar... I have to admit I thought this one sounded interesting. The premise was cute. It's Jimmy's birthday and he decides to get drunk, his boyfriend decides to get laid...just maybe not by Jimmy. The bartender whose been watching Jimmy for a while now decides it's time to make his move since said boyfriend has left the bar with someone else. Jimmy wants to know the bartender's name, bartender then decides to make this a challenge because he wants to spend more time with Jimmy. Add in some work related trouble for Jimmy and his bestfriend and partner Felicity and things are looking interesting...wait let's not stop there...let's make the ex-boyfriend a total nutbar and add a homophobe or two, a bagful of idiots, some dumb as a post law enforcement and bad guys...I know throw in some instalove/lust, we'll make Jimmy a bit of a whimp (turns out Jimmy knows karate, he just didn't get to use it), ...you see where this is going right? We're developing a laundry list. So needless to say like the laundry the focus on this one got a little scattered.

I actually liked the 'guess my name' part of this story or I would have if it had been done differently. I mean seriously 'guess my name and I'll buy you a motorcycle?' really? WTF? and I'll give you a week to figure it out in? and if you're wrong I get a kiss and apparently we're now joined at the hip...sorry this just went south real quick.

I've had this book for a while now and when the opportunity presented itself to me to listen to the audio book I figured why not and now I'm kinda' wondering why?

Sadly along with the laundry list of things already mentioned as to why I didn't enjoy this book is the fact that when Jimmy confronted his nutbar ex, said ex called him a stupid c*nt...really? why? why is it that you're insulting another man and the first that comes to mind is female anatomy? why isn't he a stupid dick, or a useless dick (I'm pretty sure he qualified for this one). I admit it this is a bit of a pet peeve for me. One that I haven't encountered in quite a while.

As for the audio portion of this review, it just didn't work for me. I couldn't put the correct visual to the voices that I was hearing. I'm not saying they were bad, just that they didn't work for me and if I'm going to listen to an audio book with a big, motorcycle riding bear in it I need a voice that brings that image to my mind. I need him to sound like

Dwayne Johnson, because seriously when I read that description that's who came to mind... until I heard the voice and then it was...

Sean Hayes don't get me wrong I love Sean Hayes. 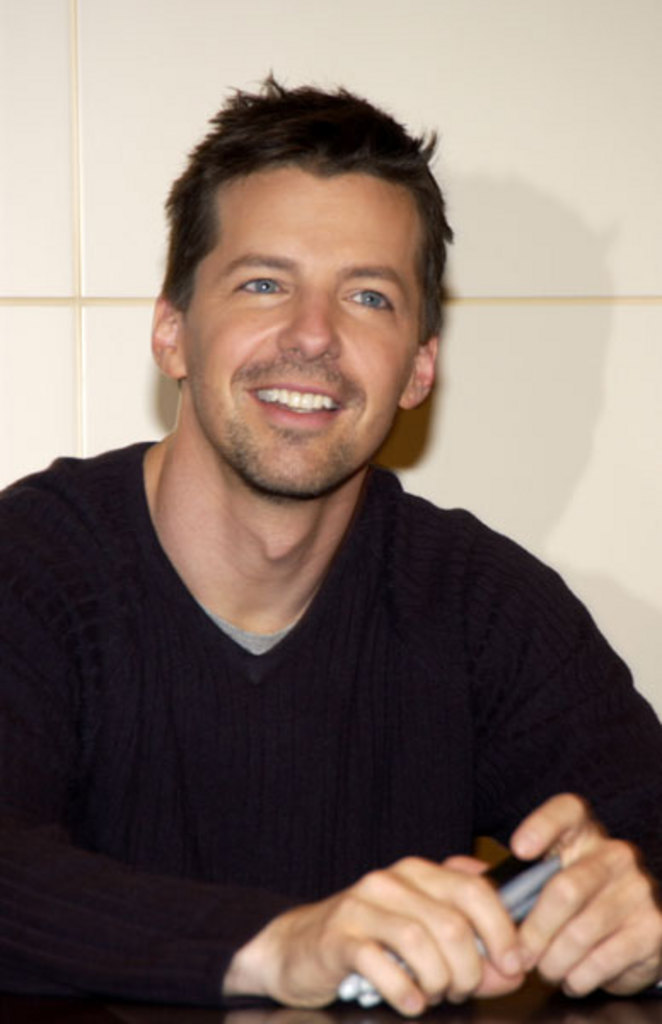 I'm sure he's a really nice guy and I know he's funny. But he's not my image of a kick ass biker dude/bar owner and his voice doesn't conjure that image but Dwayne Johnson head to toe, voice included gives me the full package and that may not be the case for everyone but it was for me.

Actually, Sean Hayes would have been a good Jimmy for me. So yeah, if these two had done the audio book I probably would have liked it a whole lot more. But they didn't and the voices that I got didn't work...end of story.

David Ross was the narrator on this one and I honestly think different voices/characters and he would do a good job, I'm certainly willing to give him another listen on something else in the future and I've peeked at the reviews for book 2 on this series and it's looking a little better so I  may give book 2 a chance as well, only this time I think I'll just read the book.

An Audiobook of 'What's In A Name?' was graciously provided by the publisher in exchange for an honest review.