This one made me happy! 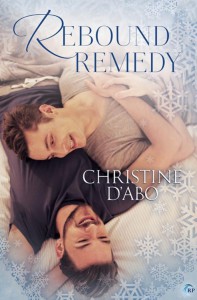 It's another win for the audible holiday stories.

Holidays are probably the worst time ever to have a relationship end and it's even worse when it happens because you're watching your boyfriend accept a marriage proposal from someone else while waiting to board the plane that's suppose to take you and said boyfriend away for a romantic holiday vacation to Banff. Honestly at this point could life suck any more than it does? Well yes, of course it could if everyone else standing around is cheering for this grand romantic gesture as you watch your heart shatter into a million pieces.

So, you've been dumped and it's the holidays...what's a guy to do? Go to your favorite neighborhood bar and have a few brews of course, damn straight I'd heading there, and tell your favorite bartender all about your woes especially when said bartender is handsome, attentive and willing to listen.

Owen pays attention to what goes on in his bar and he recognizes Cole as a regular. He thinks he's a nice guy who's always looking out for everyone else. He's seen the times that Cole's paid for other patron's tabs, put them in a cab and slipped the fare into their pockets, giving generous tips to the staff and always trying to stay under the radar with his kindness. But Owen's radar pinged a long time ago where Cole's concerned and he sees what Cole does for others. What didn't ping until hearing Cole's heartbreaking story was his gaydar but it's pinging now. It's just too bad that Cole's on the rebound and doesn't realize that Owen's bi, not that it would matter because along with his own plate full of problems Owen views Cole as being vulnerable and he's determined not to take advantage of Cole...he's just not going to be 'that guy'.

However, Owen's not surprised when Saturday night comes around and he finds Cole taking care of a drunk in the men's room. By the time they get said drunk wrestled into a cab to go home, Cole's managed to pick up a shiner and Owen's decided he's going to try and brighten up Cole's holidays with a plan to spend some time together as buddies getting to know each other and maybe making the holiday season a little bit better for themselves.  It's just unfortunate that neither man realizes the attraction he holds for the other.

'Rebound Remedy' was a fun, light, holiday story with very little angst and yes a bit of poor communication between our MCs but it can happen to the best of couples. Overall I really enjoyed this story and I loved the ending that Cole got one last moment with his ex to give him some real closure and that Cole and Owen got the beginning of their own happy beginning and that I basically smiled from start to finish on this story because I really liked these two MCs together.

And the icing on the cake for me, ironically, was that I enjoyed this as an audiobook narrated by Nick J. Russo. This is my second audio book with this narrator and he has delivered on both of them for me, but especially this time around. I think I might have fallen a little in love with Owen...well, Owen's voice. I'm sure the other character's in this story were also well done but Owen...mmmmm...Owen kinda' melted me a little. I could listen to that voice all day.

I'm actually going to be in Toronto for the holidays and I have to admit if there was a McGregor's bar with an Owen tending bar I'd be going there for a cold one just to get Owen to talk to me. Cheers everyone and Happy Holidays!

An audio ARC of 'Rebound Remedy' was graciously provided by the publisher in exchange for an honest review.