Table for dissenting party of one is now taken... 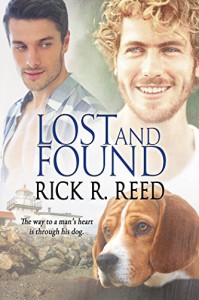 I'm going to start this on a positive note let's all look at the cover...seriously that cover is freakin' adorable. I love it cutest dog ever...ok, aside from mine, but still he's really cute and those guys aren't so bad either and added bonus they look like the MCs so I didn't end up reading the book and then saying "Who the hell is that on the cover?" because that's a thing.

Ok then we all agree the cover's lovely, right? Great, if you loved the book as much as the cover then we've now hit the point where we have to agree to disagree because I didn't, I just really and truly did not like this book. I requested it because I thought the blurb sounded adorable and sweet and so full of potential.

Flynn's lost his dog and nearly a year later he sees his dog in the park with another man but Mac has no intentions of giving up 'Hamburger'. Seriously he named the dog, Hamburger...poor creature, he's doomed to  be named after food...Flynn named him Barley and Mac names him Hamburger. Anyways, Flynn's at a loss as to what to do so he calls his BF Clara and over brunch doesn't he once again spot Barley/Hamburgers new master.  The long and the short of it is Flynn and Mac finally end up talking and events lead to a sort of shared custody of the dog.

This all should have been so cute and sweet but what it was missing for me was connection. Flynn and Mac are suppose to fall in love and what I got out of it was Flynn wants in Mac's pants, Mac wants the dog and while he thinks Flynn is hot, I felt like he was using Flynn's attraction to him to keep Flynn bringing the dog around.

There was lots of drama and angst as Mac's landlady ended up in the hospital, Mac and Flynn met one of Mac's ex's in the park when they were walking Barley/Hamburger and Mac ended up being upset by him so there went Flynn's plans for the night, it was hinted that Clara might be in love with Flynn but hey problem solved she just kind of disappeared from the story, Mac had to go back home because of a death in the family and of course Flynn wanted to be there for him and he got pushed away and this was the point at which I really disconnected from this story because not only did Flynn get pushed away when he tried to be there for Mac but when Mac returned home for the funeral, I couldn't decide if he was having a religious experience of someone slipped him some drugs and he was hallucinating but when all was said and done he went back to Seattle and they all lived HEA (ok, it's a tiny bit more complicated than that but I'm not going to spoil the ending, I may not have enjoyed the story but it doesn't mean I want to ruin it for others).

This one just wasn't happening for me no matter how hard I tried and believe me I did. I've read other books by this author 'The Ghost in Number 9' loved it. I read it in one sitting  because I didn't want to put it down, 'A Journey of the Heart' I basically cried from start to finish it was beautiful. I've read a couple more that while they weren't epic they were good, solid, enjoyable stories that I enjoyed and if asked I would say yeah, it's good check it out. I've got a couple that are on my short TBR list because friends whom I trust have recommended them to me and I've every intention of reading them.

Sadly for me this book is not in any of those categories and will forever remain on my list of books I wished I'd taken a pass on. So while 'Lost and Found' wasn't my thing there are many other reviews out there for people who really liked it...I encourage checking them all out before deciding if this book is for you or not.

An ARC of 'Lost and Found' was graciously provided by the publisher in exchange for an honest review.