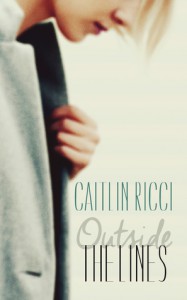 'Outside the Lines' is the story of Alex, a young college student who is doing his internship at a shelter for homeless LGBTQ kids and Socks the young gender fluid teen who enters his life.

It's on his way to this work one day that Alex meets someone desperately in need of the safety and shelter offered by Trinity House. Alex has always wanted to help disadvantaged youths and Trinity House is where he hopes to start. Not really sure of what he's doing but knowing that the young person before him desperately needs help he finally convinces them to accompany him to Trinity House and this is where their friendship begins. Unwilling and fearful of revealing their name when Alex teasingly says he's going to call them Socks, they accept the sobriquet.

At first Socks intentions are just to spend the night but one night turns into 4 years and it's during these four years that Socks and Alex become friends. When Socks turns 18 they change their name to Trinity and go off to college giving us a 6 year gap in which there is essentially no communication between Alex and Trinity (Socks).

There was so much about this story that I really liked the overall premise and how it was handled really appealed to me. I liked that during Socks time as a resident of Trinity House their relationship with Alex is strictly a friendship and there are no lines crossed. Alex knows he's in love with Socks by the time Socks leave for college but he's not going to be that guy...the one who takes advantage of Socks because he'd promised Socks when he first brought them to Trinity House that he would make sure they were always safe. Even if keeping that promise meant ending their friendship by refusing to have Trinity (Socks) live with him when they aged out of Trinity House.

While I actually liked that there was a clean break between Alex and Trinity or Trin as they are often called, I would have enjoyed a bit of background on Trin's college years as opposed to a total time jump. There were small bits of info on their college years in the part of the story that took place after they had finished college but no actual page time for the college years.

I also liked the story that picked up 6 years later, however, it felt a bit abrupt and maybe even a little rushed. Once again, for me, the story would have benefited from a bit more detail and I know that this can be a slippery slope for a story when are the details too much and when aren't they enough. I seriously wish I had the magic answer for that one, sadly I do not and in this case the lack of detail seemed to keep me from feeling the strong emotional attachment that I honestly felt should have existed between Alex and Trin.

I know I've said it before and I'll probably say this again but I'm not a big fan of age gaps but in this case the age gap was 9 years which while hedging towards the high end of my comfort zone is still a gap that I'm ok with. Especially given the manner in which the author handled this particular situation for me it was definitely well done.

'Between the Lines' is probably one of the first books that I've read about someone who is gender fluid and from that perspective I found it interesting and was really impressed with the attention to detail that the author showed in regards to the use of personal pronouns and last but not least I'd like to give a nod to a cover that honestly was what initially grabbed my attention with the simplicity of it's beauty. While covers don't factor into my rating of books whenever I see one that truly captures my attention as this one did I do like to make a point of acknowledging it.

An ARC of 'Outside the Lines' was graciously provided by the publisher via Net Galley in exchange for an honest review.