There's something rotten in Denmark... 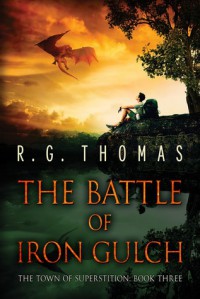 Ok, I'm not sure about Denmark but you might want to avoid the town of Iron Gulch because things are definitely not good there.

'The Battle of Iron Gulch' is the third and final installment in R. G. Thomas's 'Town of Superstition' series and what an incredibly awesome way to wrap up a series. This one kept me turning the pages into the wee hours of the night as I traveled with Thaddeus & Co. on their quest to find Thaddeus's mother and have a final confrontation with Isadora.

At the end of 'The Well of Tears' our group had decided to split into two with part of the group remaining in Superstition to take care of some things there and the other group would press on to Iron Gulch in search of Isadora and the dragon. As the second group approaches Iron Gulch they are tired and hungry and in need of shelter so they can rest before completing their trek up the mountain on the final leg of their journey.

Entering what at first glance appears to be a quaint little town, our weary travelers notice that upon closer inspection it is apparent that all is not as it seems in the little slice of Americana known as Iron Gulch. What was only suppose to be  a few days soon becomes more and the longer that our group is in Iron Gulch the more things they discover that just don't add up and they soon realize that Isadora isn't the only danger they have to contend with.

Strange things are happening in Iron Gulch and not everyone is who or what they seem to be. It's going to take all they've got for Thaddeus & Co. to get out of this alive...let alone win any battles.

if 'The Midnight Gardener' and 'The Well of Tears' were the cake 'The Battle of Iron Gulch' was definitely the icing and I personally have enjoyed every bite. If action and adventure is you thing this book has it in spades. If it's relationships your looking for you can stop here too. Thaddeus and Teofil are growing closer and while there's no hot and steamy sex...jeez, it is YA after all. There's hand holding and sweet kisses by moonlight and there might even be a few 'I love yous' thrown in between battles. There's even a bit of relationship drama...but it might not be quite what you're expecting and there are secrets revealed...some are a bit more surprising than others.

This series was like reading a modern day fairy tale. There's an evil witch and all her dastardly and honestly ugly minions, there's a damsel or two in distress, there's more than one hero there are witches, wizards, gnomes, goblins, shapeshiftes and most important of all ladies and gentlemen THERE'S A DRAGON!!! See modern day fairy tale and if that's not enough there's a happily ever after that's...just right.

Seriously can we talk about that perfect ending for a moment...no, I'm not going to tell you what happened. I'm going to tell you that the ending of this story for me was so well planned, it worked, it was perfect in an 'I can believe this' way and not in an 'over the top hearts and flowers, sunshine and lollipops' way.

Also before I forget can we just take a moment to admire this cover...while I did like all 3 covers for this series, I have to admit this one is my favorite because...DRAGON!!! Sorry, I couldn't resist :)

Part of me is sad that this journey seems to have reached it's conclusion another part of me definitely applauds the author for it. 'Superstition' is a series that started out on a strong note, it continued on a strong note and it has ended on that same strong noted. I'm not an expert in the field of YA but I know what I like and I really, really liked this.

An ARC of 'The Battle of Iron Gulch' was graciously provided by the publisher in exchange for a honest review.