Amy Lane does cute and fluffy... 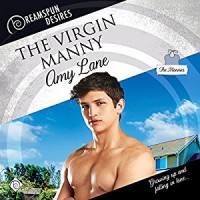 The 'Virgin Manny' is #25 in Dreamspinner's 'Dreamspun Desires' series and #1 in Amy Lane's 'The Mannies' series and in general this was just a cute, fluffy story about falling in love when you least expect it. But I have to admit I did have one issue that took me the better part of the story to get past and that was...the dreaded age difference. It's not even the fact that it's 10 years. It's the fact that Tino is 22 and Channing is 32 and in the scheme of age differences this is one of my least favorite age gaps because people tend to beat such different points in their lives during this time and while this initially niggles at me a little, as the story progressed my discomfort with this eased and finally just didn't seem to matter.

Now about that housekeeper...I don't even know where to begin with her. She gave me rage people total rage. I couldn't stand her, she was a horrible, horrible person. I never fully understood her feelings towards anyone. She was blatantly rude and disrespectful towards everyone in this story and I'm pretty sure that by the second time she opened her mouth I wanted to her kicked to the curb. Seriously I think I did a happy dance when Channing finally got rid of her.

I really liked Channing and Tino their attraction to each other was intense but it was also tempered by their mutual concern for Sammy. Sammy is Channing's nephew and following the death of Channing's sister Channing is trying to rearrange is life so that he can become the guardian that Sammy needs to raise him.

Sammy is also my one point of contention between the e-book and the audiobook. I get that children's voices are hard to do. I really do and while I must admit Sammy didn't annoy me as much as some of the other children that I've encountered in stories. He did annoy me and that really left me feeling a bit disconcerted because for me Sammy should have been a grief stricken little boy who was acting out due to the loss of his mother and yet, what I felt like I was getting was an obnoxious little sh!t who was use to getting his way and just needed a good old fashioned spanking...let me just tell you if you think this didn't cause me a little discomfort when I realized that instead of wanting to hug him and feed him milk and cookies, I wanted to give him a spanking, send him to his room...you'd be wrong.

Simply put I wanted to feel Sammy's grief and pain in his voice and instead it was just a whiny annoying child...sorry but while better than some this kid still just didn't work for me. Maybe I should just give up on audiobooks with children in them because other than that one little thing I very much enjoyed John Solo's narration of 'The Virgin Manny'.

So while this probably would have otherwise been a 4.5 star read for me, I'm taking a 1/2 star back because...annoying whiny kids make me cranky and calling it a day at 4 slightly cranky stars.

An Audiobook of 'The Virgin Manny was graciously provided by the publisher in exchange for an honest review.