I'm not sure that this has ever happened before but... All my friends loved this book. So of course I was going to read it and love it right? Well it didn't start off that way...for the first third of this book I was having the world's biggest 'what the hell?' moment. I couldn't understand it? What book was I reading? What did I miss? and I wasn't alone...nope once again I was fortunate enough to have my buddy read besties with me. Josy was on board reading the same words as me and Christelle was there as our faithful stalker cheerleader because she's already read this book and loved it. Needless to say I was starting to think maybe our sweet Christelle had too much to drink? But then there were so many others who shared her sentiments? Why weren't Josy and I invited to the party? Who did we offend?

So let's just get past what didn't work for the first third of the book as quickly as possible, ok?

Mostly it was the sex...sorry, but there are just some things that should not be part of sex on page...first off the words whopper and penis do not belong together because we all know...that since 1957...this has been... 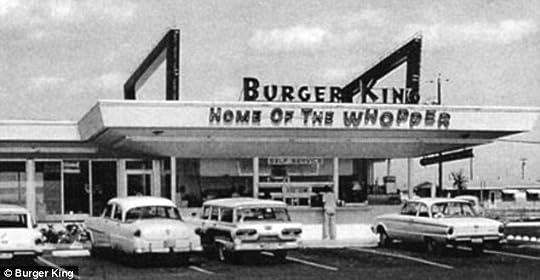 There were also a couple of additional things that were a bit of a hurdle for me on a personal level one being the age gap...22 years!!! I'm good with 10 and I can stretch it to 15 if need be, but 22 years? (please note in the author's defense this age gap is in the blurb so as much as it boggled my brain the info is there for all to see). This was a big stumbling block for me folks, I was really close to tanking it when I read that one but still not fair to my buddy and I honestly hate to DNF plus truth be told in real life if you're with someone who's 22 years older than you and you're happy what the hell do I know...as long as it's between two informed and consenting adults it's not my place to judge so time to suck it up buttercup and I did (more on this later) my last hurdle and the one that made me want to hurl my e-reader... Yep, this...I haven't encountered this one very often but when I do it doesn't tend to go well and on one occasion it was such an epic fail I've never read another book by that particular author. So you can well imagine that I was a very, very confused person by the end of day one.

Ok, seriously by the time we were at the one third mark I didn't know what to do. This one was going to get 2 maybe 2.5 stars if I put a few drinks into me before writing my review and I didn't want to bail on Josy because...rude! So needless to say we got to this point with tongue in cheek and a bit of mockery to fortify ourselves and it was getting late in Josy's world so we agreed to give it some more time and try again the next day...well, what a difference a day makes...we'd barely started reading and I was thinking that someone switched my book in the middle of the night because this one was good and just seemed to be getting better.

I found myself becoming more invested in David and Brandon's relationship and in them as people. I was getting more than just the fact that they were having really 'hot sex' and the fact that David is really well endowed...trust me that point was made several times in the first part of the book...David's a lucky man or is it Brandon? Ok, they're both lucky, so moving on from there let's talk about the age difference because...

I've read books where age gaps are ignored altogether. It's made known that there is one and then everyone acts like it's not big deal or it's totally ignored even though you know there had to be one and sometimes it goes the other way and it becomes too much of a big deal and the focus it's given is ridiculous especially when you learn at some point that the 'age gap' is maybe 5 years? So to me age gaps and how they're dealt with aren't about a right or wrong way, it's just a matter of what works for the individual reading the story and in this case for me the age gap was not only dealt with effectively, it was done in a way that not only worked but made me see it as a positive and emotionally healthy relationship shared by two adult men. I could probably go on for a whole lot longer as to why this relationship worked for me and other age gap stories haven't but let's not and just accept that the author ultimately for me did an awesome job with the age gap.

Moving on to my other quirk...talking to your dead partner...this one can be a whole lot dicier considering that this wasn't listed as a paranormal story and hey... dead people talking...that's totally paranormal/supernatural in my world, except that as I read the story what I felt was that this wasn't a case of 'talking dead people' this was David trying to move on from losing the man he'd passionately loved for 15+ years and the voice he was hearing was simply his mind filling in the blanks for someone whose opinions mattered to him, someone whom he knew wanted him to move on and find love again but someone who was no longer there to tell him the things that he knew they would and as someone who's been married for 30 years I can well imagine that if I lost my husband tomorrow I'd be hearing his voice guiding me, offering me advice and support when I needed it just as he's done for the past 30 years and for me this was what was happening for David.

While the first part of this book didn't start out well for me at all. I am so incredibly glad that I didn't give up because the last two thirds of this book were beyond worthwhile.  Brandon's confrontation with his 'friend' Ethan, so well done. I wanted to stand up and applaud Brandon for his actions. David's actions at the party over how his friends treated Brandon...shame on you, David. I was saddened by your actions or lack there of but still so well written and realistically presented.

Also in the blurb it mentions an 'unexpected tragedy' well can I just say this right here...blew my mind. On a personal level I know how this all felt. I shared every bit of Brandon's pain both physically and emotionally, holy hell this gutted me and I damned near had to stop reading...you nailed this Mr. Winter like you could not imagine you nailed it hard core and again I pushed through because really after I dried my eyes and pulled myself together a little I was damned if I was quitting now. I need to see this through, I needed to see things get better for both Brandon and David.

Ok, so what else did I like about this book...Kyle...yeah, yeah, I know he's the dead guy but trust me, he plays a really, really important role in David and Brandon's relationship and it's beautiful and so incredibly well done and for me Kyle became the icing on this cake.

Maybe this didn't start out so great, like I said 2 maybe 2.5 slightly mocking stars but with the support of my besties Josy and Christelle. I got to the good stuff and the good stuff took this from 'what the hell was I thinking?' to 'why the hell didn't I read this sooner?' and we're all set for Mr. Winter's next book 'Every Breath You Take', right ladies? We just need the book...hint, hint...