Would you do anything for love? 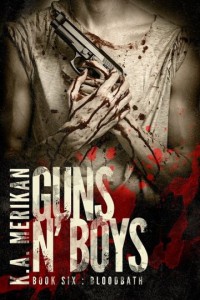 If you're looking for something cute, fluffy, sweet, mushy and adorable...carry on because this is probably not for you. However, if you're interested in edgy, dark, intense and gut clenching...well, pull up a chair. I think you've just come home.

'Bloodbath' is to say the least an accurate title for what happens in this story. Dom and Seth are embroiled in a world that is harsh, cruel and dangerous on a daily basis. Any day that's good is a day that you survive. But Dom wants more than survival and Seth...Seth wants whatever keeps him at Dom's side. But being with Dom has a price and the real questions are 'is Seth willing to pay that price?' and 'does Dom really want him to?'

As always there are really two stories being told here. The first one is the obvious one. It's about Seth, Dom and their struggle to reclaim the life they had to give up. The second one while maybe not quite as obvious I think is still fairly apparent to anyone who follow's this series. It's about Seth and Dom's struggle to retain who they are as individuals and what they have together as  a couple. For me Seth is the light to Dom's dark. These men balance each other. Seth brings a light and promise to Dom and makes him remember that there are good things in this world and that he in spite of all he's had to do is still a good person worthy of being loved. Dom keeps the dark from Seth and protects him from a world that would easily consume him and from having to lose the light inside him that Dom so passionately loves.

The events of 'Bloodbath' tested both of these men as we watched Seth lose himself in a world of violence that seemed to be consuming his soul little by little and left Dom conflicted between what he needed Seth to do and what he could live with Seth doing.

Once again I was all in on this one from start to finish. Dom and Seth share a love that is incredibly intense and ultimately binds them to each other above all else and it was at the point where Dom found himself pushing Seth to become what he was never meant to be that Dom realized the how and why of his love for Seth that things became so clear for him and he pulls Seth back from what would possibly be a point of no return for Seth and their relationship.

I love the passion and intensity that the authors have given to these characters and each story allows us to see them grow as both individuals and as a couple. The challenges that they face are not the norm and I certainly wouldn't want all my books to be as intense as Dom and Seth's stories are I find myself enjoying this series more and more with each subsequent release and I'm already anticipating what comes next in Dom & Seth's story.

As with the last couple of books that I've read in this series when I reached the end I found that there was a song rattling around in my brain that for me became the theme song for that particular story and this time the song was another rock classic...

An ARC of 'Bloodbath' was graciously provided by the author in exchange for an honest review.