It seems the circus has come to town... 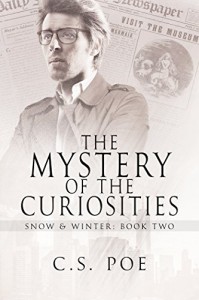 While I enjoyed 'The Mystery of Nevermore' book 1 in C. S. Poe's Snow & Winter series a tiny, tiny bit more than this one that does not mean that 'The Mystery of the Curiosities' was anything less than enjoyable.

I think possibly part of my added enthusiasm for the first book was just the joy of discovering a new author who was writing a new series that I wanted to read...see all the shiny new that's going on here? I was dazzled...that's right I suffer from magpie syndrome. However, while this book isn't the shiny new of a first book in a new series by a new author it still holds it's own with a well written story about characters that I truly like solving a well done mystery. Ms. Poe had me guessing right up until the end when I knew who did it and why only to find out things were not as they seemed...well done, I love a mystery that keeps my brain guessing from start to finish.

While I did get a bit frustrated with Seb for his perpetual lies of omission and half-truths, I do have to admit were I in his shoes I'm not sure I would have done any better and I think that while I don't advocate his behavior I probably felt a little more lenient towards him once my initial frustration wore off and I was force to admit that while his decision making skills weren't always stellar neither were they malicious or intended to do harm...in fact, it was quite the opposite he wanted to resolve things in the hopes of keeping anyone else from being hurt...so his intentions were good...mmmmm...I think there's a road somewhere paved with good intentions...just sayin'

Apart from the mystery and just the story in general one of the things that I truly loved was the approach that the author took with Calvin's PTSD. It wasn't made light of with implications that little more than some good sex would fix it. While Calvin doesn't want to seek medical help neither is Seb willing to give up on getting him to reconsider this decision. There is real concern for Calvin on the part of his partner, Quinn and Seb's father and not just Seb, but as we all know you can't help someone until they want to be helped. So to me Seb was being realistic about things in that he wasn't forcing Calvin to do something he's not ready to do but neither was he willing to stick his head in the sand and just hope it'd go away.

I love Seb and Calvin the passion is there and it's wonderfully tempered with humor and sweet yet sometimes awkward moments of them sharing their feelings whether saying 'I love you' or when Calvin is trying to explain how much he needs Seb to be safe or Seb seeking Calvin's forgiveness for something that he new he shouldn't have done long before he ever did it. These two tug at my heartstrings and make me smile contentedly as I travel along with them to solve their latest mystery.

An ARC of 'The Mystery of the Curiosities' was graciously provided by the publisher in exchange for an honest review.