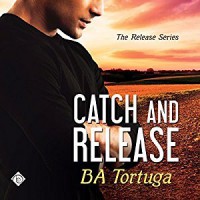 I really should have stopped at reading the e-book on this one.

I loved 'Catch and Release'. It's the third book in B. A. Tortuga's series 'The Release'. I loved it so much I gave it 5 stars...ok, it was 4.5 stars but I rounded up over on GR. Here's the link to my review of the e-book...be warned it's a long one because I loved this book it was a fun read...

So when the audio book came available I foolishly said yes because I loved the book and I've been on a bit of a roll with my books lately both e-books and audio so I was being optimistic...very, very optimistic.

I'm sure there audiophiles out there who have or will enjoy Lou Lambert and based on a couple of other samples that I've checked out I may join them in future but this time around it was so not happening.

For me audio books are a very subjective point of view, especially if you've already read the books. The listener...or at least I go into it with some pre-conceived ideas of how the characters should sound and if you're lucky the narrator's voices match what's already floating around in your brain or at least they work in a general sense. For me there are some things that are a must such as each character's voice is distinct and I know who's talking just by hearing their voice and not because the story tells me that it's Sage or Jayden or Dakota speaking. Unfortunately in this instance the voices all felt the same no matter who was speaking it was like listening to the 50+ plus, redneck, good 'ole boys, cowboy club and the voices just all sort of ran together even the women sounded more like good 'ole boys than women.

On the upside at least that consistent voice wasn't flat and monotone...so there was that. As a matter of fact at times it just tickled my funny bone and I did get a few chuckles but I wouldn't say they were really for the right reason. I do have to admit this was one time that I was grateful for a book without any real sex scenes because honestly these voices doing a sex scene might have given me a fit of the giggles. I don't think I would have survived the actual event.

Initially the audio book was getting 2 maybe 2.5 stars from me but in the end I decided that anything that gave me a laugh...for whatever reason deserved 3 stars so I'm going with that.

At the end of it all my 4.5 rounded up to 5 stars read gets 3.5 stars for the audio version...so as I said sometimes less is more.