This is not the Peter Pan of my childhood... 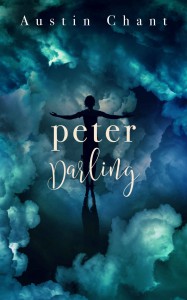 I have to admit I'm not sure quite what I was expecting when I went into this but after sniffing and poking at the book I finally decided I just needed to put on my big girl pants and find out.

So what I was expecting...well, I'm still not sure. What I got was a retelling of a childhood story that to be quite honest was never really a favorite of mine. As a child I just never connected with Peter...I'm don't really know why...it could be as simple as he was a boy and I'm a girl...who knows. Needless to say this also contributed to making 'Peter Darling' a bit of a hard sell with me. But I was still curious after reading the blurb and then I started seeing all these awesome reviews being posted by my friends so I figured it was time to find out.

What I found was a story about a child who essentially came from a good home, but not the right home. Not a home where he was loved for who he was and allowed to be that person. Feeling frustrated, angry and alone Peter runs away to Neverland a place where he can be himself, where he has friends and goes on adventures...fighting Pirates and accomplishing brave and heroic deeds. But as with most children, Peter also begins to miss his family. Remembering not just the bad things but the good...his brothers, Michael and John, his parents and how much he misses everyone. Ultimately Peter realizes that it's time to go home.

Ten years have passed since Pan has left Neverland and they haven't turned out to be ten good years for either. No longer able to deal with the real world...Pan returns to Neverland...to his friends,Tinkerbell and the lost boys and to continue his battle with his nemesis...Hook. Only Peter's grown up and things aren't quite the same in Neverland. Peter begins to wonder if returning was the right choice but he knows staying with his family wasn't an option either.

I found myself being drawn into the story of 'Peter Darling' far more easily and readily than I was ever drawn into the original story of Peter Pan. I was fascinated with both the characters and this version of Neverland. While Hook has always been my least favorite character in this fairy tale, this time around not only did I like him, but for me, he was the most captivating character in the book.

The Hook we meet in 'Peter Darling' displays far more depth than what I've come to expect from this character in previous versions of the story. While he can be cruel, ruthless and greedy there were also moments of depth that tempered that side of him...we were shown intelligence and understanding, emotions such as compassion, grief, sorrow, regret, caring and yes, even love.

'Peter Darling' was not a happy go light tale. It was at times a bit sad with a touch of a dark side to it, that in truth, I always felt was also contained within the original story. For me 'Peter Darling' was also a beautifully told story by a 'new to me author' whose talent for crafting words into images left me more than a little impressed.  While "Peter Darling" isn't the only thing written by this author, it does appear to be their first novel...which leaves me to wonder if their first novel is this good...what's coming next?

An ARC of 'Peter Darling' was graciously provided by the publisher via NetGalley in exchange for an honest review.