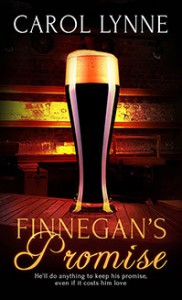 'Finnegan's Promise' was originally released in 2007 and has found a new home with Pride Publishing who are re-releasing it on July 18th and while I've read a lot of Carol Lynne books over the years I've managed to have missed this one. So when I was given the opportunity to review it...how could I resist.

I felt like this was a story with a lot of potential. Calder Finnegan is a pro-football player whose father owns Finnegan's a neighborhood pub in Calder's hometown. When Calder's father Sean ask him to come home and help out with the pub during the off-season so he can take a much needed vacation and return to Ireland to see family... Calder's torn he hasn't been home since his ma passed, but while he's not happy about it, Calder shows up thinking maybe it's time to confront his dad and put their past to rest. What Calder isn't expecting is the sexy and talented as hell bartender named Mick that he finds tending bar when he arrives unannounced at Finnegan's Pub.

Sean vacation is cut short when gets worse and doctors advise him to return home while he still can. While Sean and Calder (or Fin as he's usually called). As Sean and Fin begin to work on healing the rift between them, Mick finds that he's also able to confront and deal with his own issues.

I have to admit I was surprised that this didn't end up being a 4 maybe even 5 star read for me, unfortunately it just didn't happen. This one just didn't give me the depth and emotion that I felt the circumstances warranted.

There were pieces missing that would have helped me to become more invested in the story line. For example the books starts with Calder showing up unexpectedly at the pub and from there it basically jumps ahead 10 days to Calder and Mick jumping each other's bones after the pub closes one night. There's very little story covering that 10 day span of time and most of what there is relates more to Calder and his da than Calder and Mick and most of the relationship development between Calder and Mick either revolves around sex. Either they're having it or the conversation occurs before, during or after sex. While I'm not prudish about sex what really makes it work for me is when I feel the connection between the MCs is based on more than sex. I need to feel something that's emotional and intellectual and doesn't necessarily have it's origins in sex and when this doesn't happen for me neither does an emotional connection with the MCs or the story in general and for me this means it's going to be an ok or a good read but not a 'melt my heart leave me in a puddle of happy goo on the floor' amazing read that can happen.

While 'Finnegan's Promise' turned out to be a good read instead of the awesome one I'd hoped I'm still a fan of this author and her stories many of which have an underlying theme that 'love is love and we should all be free to love who we want' and that's an idea that I totally support being put out into the world at every opportunity.

A copy of 'Finnegan's Promise' was graciously provided by the publisher in exchange for an honest review.