This one is full of awesomeness... 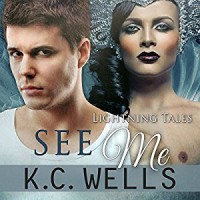 ‘See Me’ is the third book in K. C. Wells ‘Lightening Tales’ series and so far, my favorite both in terms of the story and the audio.

While we haven’t really met Adrian DeSoto in previous books he has been mentioned and we were given enough information to know that for Adrian…high school wasn’t fun. Adrian was the popular choice for ‘bullying victim of the day’ with the school jocks. The start of grade eleven saw a change in Adrian he became determined that he was no longer going to be the victim and he used all of his considerable acting skills to hide his nervousness and fear as he begins to stand up for himself against the school bullies…jocks like Marty Cavanaugh.

Happily, we are once again treated to glimpses of Alex & Nick and Connor & Ric as their friendship with Adrian brings them into the story and while I had no trouble liking Adrian, Martin was a little tougher sell but not buy much. Adrian may have been a bit over the top and flamboyant, he was also sweet, vulnerable and nobody’s pushover…needless to say I quickly came to like Adrian…a lot!

What really surprised me was the realization of how quickly I came to like Marty. Initially I had my reservations where Marty was concerned and initially I think what I felt for this character was more pity and compassion than actually liking him. But little by little Marty whittled away at my defences and I really came to like him once I got to see the insecure and vulnerable person that hid behind the bully and cheer for Marty as he did battle with his demons to overcome the negative behavior that led to his behavior.

It broke my heart that for Marty interacting with his parents…even his mom who turned out to be awesome in her own right, was such a stressful event. Sadly, Marty’s father’s only redemptive quality was that he didn’t beat his wife…he just verbally abused her and his son…gee, what a swell guy he is…NOT!

However, one of the things that I ended up loving the most about this book is that we are shown a side to bullying that we don’t often see and frequently forget which is that sometimes even the bully gets bullied. Please don’t misunderstand ‘bullying is not ok’…EVER! But sometimes to make a person see why a behavior is wrong it helps if we understand what factors may have contributed to it. It was seeing this side of Marty that made me see him not just as the bully but also as the victim of bullying…he really was both and seeing so much of Marty’s life and not just his interaction with Adrian gave a much clearer picture of Marty.

I loved all the background that we were given between Marty and Adrian and how it was woven into the story. It was this background that not only showed us where they came from but so much of what shaped them into the people they became, what they meant to each other and how they influenced each other’s lives.

Joel Leslie did an excellent job with the character voices in this audiobook. I loved the vulnerable quality that was clearly evident in both of the MCs voices as they bared their heart and soul to each other and all my boxes got checked when it came to being the narrator’s ability to lend consistency and uniqueness to the voices of the characters.

While I very much enjoyed the first two books ‘See Me’ really seemed to resonate with me and while it’s partly due to the fact that for me this was an even better story, it’s also due to the narrator making a better connection with the characters one that felt real and natural and gave me the voices that I was anticipating.

An audiobook of “See Me” was graciously provided by the author in exchange for an honest review.