It's hockey night in Canada!!!! 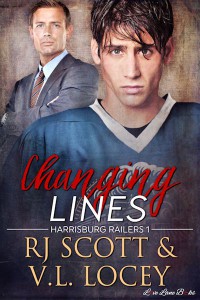 ‘Changing Lines’ is the first book in a new series by R.J. Scott and V.L. Locey. While I’m a long time fan of R.J. Scott this is my first time reading anything by Ms. Scott’s co-author V.L. Locey and from the looks of things I’m about to become a fan of this author as well…I’m definitely a fan of this series already.

It’s hockey and I am after all Canadian and a Bruins fan, I’ll explain this shortly. Tennant ‘Ten’ Rowe is one of the 3 brothers who are making a name for themselves on the ice. There’s Ryan his oldest brother captain of the amazing Boston Bruins. Unfortunately, while he loves his little brother Ten, Ryan tends to be a bit obnoxious at times but hey, that’s what big brothers are for…I should know I have four of them. Then there’s Jamie (James to their mom) he’s the peace keeper the negotiator of the family and Ten well he’s the baby and needless to say he’s tired of living in everyone’s shadow. He’s got talent of his own and then some but between his two older brothers and playing in the shadow of Tate Collins his teammate and the shining star of Texas hockey Ten’s thinking that getting traded to the Railers might not be such a bad thing and maybe it’ll be his chance to shine.

Jared ‘Mads’ Madsen is the defensive coach for the Railers. Having his NHL career cut short wasn’t his plan but at least coaching allows him to continue with the game he loves and spend time with his son, Ryker.  Jared’s not a stranger to the Rowe brothers but what he suddenly realizes is that Ten’s may be 9 years his junior but he’s not a little kid anymore and keeping his hands off may not be something Mads really wants to do.

I’m not sure where to start here so let’s start with the obvious I enjoyed the hell outta’ this story…I loved it. For me it was well balanced between the romance and the hockey. I liked the amount of hockey that was there in terms of the detail…like I said “I am Canadian”. I loved Mads and how he refused to rush things between him and Ten. He wanted to take it slow for him and Ten to really get to know one other. I loved that it wasn’t just a case of ‘Hi, how you been? and then falling into bed. That took time and drove Ten crazy as he discovered that Mads may have wanted him but he wasn’t going to lose control or think with his little head…nope Mads was a man with the maturity to know that ‘good things come to he, who waits’ or has strawberries… I will never view strawberries quite the same again.

These two men are sweet, funny, sexy and just really good together both in and out of the bedroom. Their communication is strong and then there’s all the other fun stuff. Things like Mads son Ryker. He was a typical 17 year old wanting to rush his life but a the still time silently crying out for help and guidance from his parents. His grandfather not so much…the guy was an idiot…but you’ll have to read the story for the scoop on him.

I would also seriously like to spend a holiday at the Rowe house this family is awesome…don’t get me wrong, they’re not perfect. They fight, they argue and then they talk and make up or go to the treehouse…again you’ll need to read the story to find out about this but the treehouse is awesome.

‘Changing Lines’ is by no means a comedy but it is a good start to what I think is going to be an enjoyable hockey themed series. There were hot men both on and off the ice, humorous moments…also on and off the ice, there’s Pokemon and Pokemon tattoos, there’s Sven, one of the best Russian goalies EVER!…I love Sven and a coming out that is epic from start to finish.

If book 2 is anything like this one…well all I can say is…‘Hockey Night in Canada’ just got a whole lot more interesting.

A copy of ‘Changing Lines’ was graciously provided by the authors in exchange for an honest review.