A horse trainer and a retired surgeon...how could things possibly go wrong? 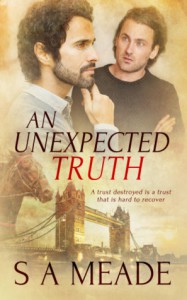 ‘An Unexpected Truth’ is my first book by this author…definitely not my last. I was pretty much enchanted from the word go when I realized that the story was set in England. I have a definite fondness for England…maybe, my in-laws are from there and maybe my mother’s family is from there and maybe it’s just a beautiful country but whatever, I love it so reading a book with England as the setting was definitely no hardship add in that it’s set in the countryside and there are horses and things are just getting better and better.

Brendan Matthews trains racehorses for a living and he’s happy with his quiet life but he’s also not a foolish man so when opportunity brings 6 yearlings that display more than a little potential to him and they happen to be owned by a man who’s ‘not to shabby either’. Who is Brendan to not open the door when opportunity knocks.

Adam Ahmadi is a wealthy orthopedic surgeon who’s looking for something to do with his time and money after an accident damages his hand forcing him to retire early. He was thinking horses but one look at Brendan and Adam’s interest go beyond having Brendan train his horses.

I really enjoyed this story from start to finish. The first part of the story focused on Brendan and Adam’s relationship and it was wonderful. These two men getting to know each other was sweet and a slow burn. They spent time together taking care of the horses, cooking for one another, taking walks, getting to know one another. There was no insta-love here and while there’s a bit of an age gap it’s not a big deal…so much not a big deal that I really can’t remember exactly how big of an age gap it was…so definitely not an issue for me.

The relationship between Brendan and Adam unfolded beautifully and was definitely one of my favorite parts. Also, there was a bit of drama and suspense unfolding in the background and while this part of the story was more prominent in the latter part of the book and for a while it was the dominant part of the story it was necessary in order for things to play out to a conclusion that brought us back to Brendan and Adam’s relationship and the HEA that these men so deserved.

As Brendan and Adam’s relationship deepens Adam’s past rears it’s ugly head forcing them apart and leaving Brendan more than a little mystified about what Adam’s feelings are and whether or not the future he wants with Adam can be a reality or not.

The ending of this one worked for me. There was just enough going on to hold my interest but not enough to make it overwhelming or confusing since most of what happened around Adam’s past wasn’t really revealed or dealt with until the last half of the book.

For me ‘An Unexpected Truth’ was a story that I was easily able to slip into reading and enjoy. The writing style was so enjoyable and easy to follow, the characters worked well together and I found myself enjoying all aspects of the story…the romance, the suspense, the little bit of a plot twist that I didn’t quite see coming. It all came together to create an unique and enjoyable reading experience that I look forward to experiencing again.

A copy of ‘An Unexpected Truth’ was graciously provided by the publisher in exchange for an honest review.