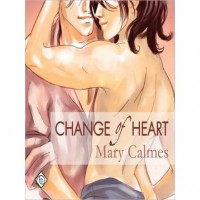 'Change of Heart' is the first book in the Mary Calmes series of the same title. I actually read this series around 4 or 5 years ago when it was released in e-book and I liked it. I have to admit it's not my favorite probably not even my second favorite but still I enjoyed it, enough that when I saw that the books were available on audio I didn't really hesitate to buy myself the audio books.

I'm on a bit of a time constraint here because were in the middle of a move so this at best a sorta', kinda', almost review...

'Change of Heart' is set in the world of shapeshifters...no, not the same ones as Ms. Calmes L'Ange series. These guys are altogether different. Gin Rayne and Logan Church are the MCs for most of this series...think Sam and Jory only they can shift into panthers...I love panthers...yes, this was what got me to read the books in the first place...if there be no dragons...just throw in a panther and chances are you'll catch my attention.

Now for more about this story...read the blurbs because...time constraint. I'm going to just quickly chat about the audio portion of this story now. Sean Crisden is the narrator for this one and a couple of the later stories as well but in this particular audio book I have to say while some of it was ok...there was one teensy, weensy little niggle that I had with this one and it came in the form of Jin's best friend, Crane. All I'm going to say is..."I had a very definite idea about how Crane was suppose to sound and I'm sorry but Crane sounding like Fozzie Bear...wasn't it. Crane's voice just really, really didn't work for me and I have to admit I am extremely grateful for the fact that Crane didn't see any action of the smexy variety in this one because that just would not have been cool...not at all.

I like Sean Crisden but as one of my friends commented 'he can sometimes be hit and miss for them' and I think I have to admit I agree with this statement as I've listened to a couple of stories narrated by him that I've really enjoyed and then there's been some that...well...just not so much.

At the end of it all I've decided to just leave this one at 3 stars and carry on.