Sometimes it's the little things that make all the difference... 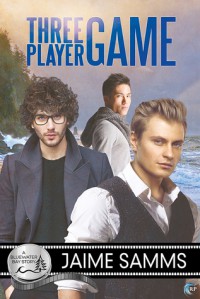 'Three Player Game' is a menage story that starts with an established couple who have always wanted a third person in their relationship and they've also known for a while who they wanted that third person to be...the problem here is that maybe he doesn't want to be that person or maybe he's just afraid to allow himself to be 'that person'.

Vince and Pete have been a couple for a while now and having a third person in their relationship has pretty much always been a part of their plan. Vince wants that third person to be Lee, a man he has a work history with and while Pete's not as sure as Vince initially that he wants it to be Lee, he's leaning towards 'yes' on the issue and definitely willing to give the man strong consideration.  Lee's the holdout. He's given his trust before it left him hurt both physically and emotionally to the point where he's spent the ensuing years closing himself off from the world believing that he'll only be safe if he's on his own. Vince and Lee have some walls to break down if they plan on making their duo a trio permanently.

There's definitely some history here both between Vince and Pete as I said they come into the story as an established couple and between Vince and Lee on a working level only. As well both Vince and Lee have a connection to their boss, Blair Carruthers, whose story is told in Bluewater Bay #12 How the Cookie Crumbles. Which I admit I haven't read yet, however, I didn't have a problem parsing out the connections pre-Bluewater Bay as the author provides the background as the story goes along.

I didn't even really have a problem with the fact that this story has a menage grouping...my concern was with the fact that it was an established couple adding to their dynamic. This is probably one of my least favorite scenarios. So I have to admit I waffled on this one for a long time before I finally decided I was going to bite the bullet and read the book. Initially I was a little hesitant but things ultimately clicked into place for me and I ended up really enjoying this one.

There were a number of factors that helped to make it work...the first one being the author, I really like Jaime Samms. She's the author of one of my favorite menage books 'The Foster Family' and it's based on the same premise of an established couple adding a third to their relationship. So having already experienced this dynamic with her, I had faith. The fact that in general I've really enjoyed the Bluewater Bay books that I've read so far also added to my faith that this would work. Ultimately though it came down to the story and luckily for me there were a lot of little things that I liked about this one.

For Vince and Pete adding Lee to the dynamics wasn't an easy feat to say the least. Lee was more than a little resistant and there were times that Vince and Pete had their reservations as well, which made sense...since the consequences of adding another person to your relationship is far more life altering than buying a new set of dishes especially when that person 'seems' to be resistant to the idea.  I'd be doing a lot more soul searching and second guessing myself than they did if it was me...just sayin'.

I really liked all three of these men...Vince, whose work and home personas were essentially polar opposites. At work he was the gopher, that Lee bossed around,  he was calm, efficient, organized and incredibly observant, taking orders without hesitation but at home he was the one giving the orders and while he was still all those other things they were expressed differently and utilized to provide the care that his partners needed.

Pete like Vince had polar opposite work and home personas only at work he was the one organizing and ordering people around, making sure things got done how and when they needed to be. But at home he was the one who wanted to give up control to let someone else be in charge and care for him but Pete was also a nurturer and caregiver. Pete was also high maintenance and while Vince loved him tremendously taking care of Pete's needs also drained him. A reality that was apparent to both Vince and Pete and one of the contributing factors to their desire to add a third person to the relationship.

While Lee was prickly and obstinate hiding his gentler more caring side and his need to give up control and trust someone else to provide him with what he needed and wanted. For Vince meeting Pete's needs was like dealing with a force of nature, Lee's needs meshed more with Vince's and allowed him to restore some of his own balance at the same time.

Sexually the dynamics were different between each of these men as a pair and somehow things came together to fill the missing spaces in Pete and Vince's relationship creating a place for each of them that was unique.

Making their relationship work turned out to be a learning experience for all three of these men.  Vince had to learn to trust in himself when it came to Lee. That he would be able to make things work without Pete as their buffer. Pete had to learn to step back and allow Vince and Lee find their own way to each other and Lee...well, Lee had the most to learn. He had to learn to trust not just Vince and Pete but himself...that he could make choices that weren't always going to get him hurt and to trust that he was not only worth being loved and cared for but he deserved it.

This one worked for me and while I can't define one major reason. I would have to say that it was more a case of a bunch of little things coming together to take me back to Bluewater Bay for yet another enjoyable reading experience.

A copy of 'Three Player Game' was graciously provided by the publisher in exchange for an honest review.