This one was more miss than hit for me... 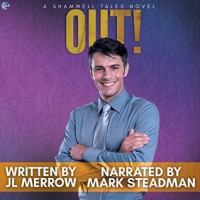 'Out' is the third book in JL Merrow's 'Shamwell Tales' story and so far it's the one that I've enjoyed the least.

Patrick was a secondary character that we met in 'Played' and I was actually looking forward to his story. In 'Played' we met Patrick when he was recovering from a broken leg and he did a bit of flirting with Con...that basically went nowhere, but I was intrigued and when I found out that he was the subject of this book...well that was all I needed to say 'ok, hook me up.'

Unfortunately, nothing really hooked me until about halfway through the story. For the most part the first half of this book for me just seemed like a big ole bitchfest.

Patrick's a 25 year old charity worker, he's out and proud and spends more than a little time on his soapbox and apparently has a thing for older men.

Mark's a recently divorced father of a 14 year old who's closeted but not...it's complicated and I'm not sure I can explain this one so let's just move on from this. When Patrick's ex calls him at her wits end about their daughter's latest escapades. Mark decides that it's time he stepped up and took a more active role in her upbringing. So he leaves his job as a successful tax adviser and moves himself and his daughter to the small village of Shamwell. I think that Mark's daughter Fen (Florence) is suppose to be a feisty, sassy, little spitfire unfortunately what I got was an obnoxious, mouthy, ungrateful brat and I have to admit this was at times due in no small part to the parents...sorry, the dynamics between Mark, his ex and their daughter just were not good.

Then there's Patrick and his mother. Age gaps aren't really a big issue for me these days...usually, but when it was made clear more than once that 'Mark was old enough to be Patrick's dad or date his mom' which can I just say 'I think this was a case of overstating the issue...the age difference here is 14 years old so...we're talking a really young daddy here folks' and when it comes to Patrick's mom well for part of the story I was pretty unimpressed with her.

While the last part of the book worked better for me...mostly, it still just wasn't great and truthfully what was probably suppose to be an over the top comedy of errors, with a bit of tongue in cheek thrown felt more like something that was just trying to hard and falling flat more often than not.

Worst of all I totally didn't get Patrick and Mark. The spent so much times at odds with each other that when they finally got around to  the 'I love yous' I was like what the hell? Really, cause I'm not seeing it?'

Ok so I've made my point overall this one just didn't work for me. But that's not to say that there wasn't anything that I liked. I liked Mark's PA from his tax advisor days and then there was Lex, Patrick's assistant at the non-profit and probably my favorite character in the story. There were in fact some enjoyable moments and Fen in fact actually began to become a likeable kid in the last part of the story...she felt more like a feisty, angst and emotion driven teenager and her obnoxious, brattiness definitely eased up.

Lastly if you take a boo over on GR you'll find a lot of reviews that don't share my sentiment and I'm thinking that this is just a case of it works or it doesn't and for me overall to much of it didn't.

An audio book of 'Out' was graciously provided by the publisher in exchange for an honest review.