There's late and then there's...I might have gotten lost along the way... 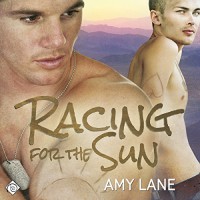 I have to admit this was one Amy Lane book that for whatever reason just never really caught my eye until I read the second book in her  series "Fish Out of Water" and Jackson and Ellery pay Sonny and Ace a visit in search of some information and now I'm interested..and even then there's been a few side trips along the way before I truly reached my destination...but I'm here at last and...

I soon discovered that the quickest way to truly reach my destination, by that I mean get into this story, of course, is via audio book and when I saw that it was narrated by Nick J. Russo well problem solved since he is absolutely one of my favorite narrators when it comes to audio books... so audio book purchased and destination reached.

I loved this story. Yes there were some questionable moments, a f*k-ton of angst and at times...well lets just say that the hinges on Sonny's door are definitely coming loose and the fact that it's Ace who keeps him on any kind of an even keel is abundantly clear as is the fact that there are really no limits on what Ace will do to protect Sonny.

Would this kind of relationship work for me in the real world? Hell NO!!! But, in the world that Ms. Lane has created I was so on board with Sonny and Ace...just think of me and the middle-aged lady sitting front and center in their cheering section.

Including this one I've listened to 22 audio books narrated by Nick J. Russo and I've enjoyed the hell out of his performances on every one of them and more than once on most of them, but I have to say I think this is going to be one of my favorites. He totally nailed the voices for both of the MCs but especially Ace.

Ok, so I'm keeping it short and sweet today because honestly there's already a lot of good reviews out there for this one both the e-book and the audio...I was definitely more than a little late to the party when it came to this book. But 'Better late than never' as the saying goes and I'm so behind on my TBR list, I know I'm never going to get caught up...but a girls gotta' try, right?