More fun with James and Derek... 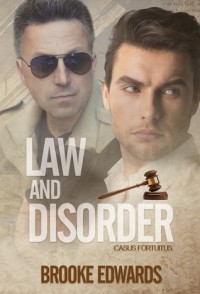 'Law and Disorder' basically picks up where 'Mens Rea' ended and while James and Derek's relationship continues to move forward it's not without obstacles. But when you're a police chief and an assistant USDA those obstacles take a lot of different forms. James catches the bad guys and Derek tries them and bad guys they don't care about quality time for people in love...not that anyone's used the 'L' word yet.

But it's not until James is called to the scene of his latest crime...a whole lot of dead sparrows all neatly lined up on the Justice Building that Derek and James begin to find out what busy means because those birds are just the beginning of a crime spree that's going to confound them all and happily me too. I love it when I solve the crime with the characters and not ahead of them...leaving me to wonder why these characters that I've come to like aren't smart enough to figure out what for me was the obvious. Happily that did not happen here and I was left to solve this with New York City's finest. As events progress it does become increasingly clear that things are personal and whoever is behind the unusual events that are leaving everyone more than a little confused has someone specific in mind.

While the relationship between James and Derek is an important part of this story, I can't honestly say that I'd call this a romance novel it's really more of a mystery/thriller story with secondary story line of romance. But having said that the romance between these two is also a solid constant part of the story.

If I liked the first story...I loved this one. The banter between James and Derek for me is delightful. The fact that these two men with busy and stressful careers have so little time together...well...that's reality and honestly it just made me appreciate how much more precious their private time was.

While the usual cast of secondary characters are present we also have the addition of Briony, Derek's assistant and Peter Saracen who for some reason seems to really get under Daniel's skin...mmmm...I wonder what's up with that and best of all we get to meet Derek's parents.

As the story progresses along with the questions of who and why things are happening there's also a question of will James and Derek's relationship survive. James's protective instincts are in overdrive and Derek's habit of distancing himself and handling things on his own are putting them at odds with each other and causing a rift one that James will need to bridge because Derek's reaching his limits on how much he can take.

I really like this author's writing style. While the story moves at a good pace and there's a lot going on I was kept interested and my mind was engaged from start to finish without being overwhelmed. It was nice not having to wade through a lot of unnecessary details trying to sort through them and figure out what mattered nor was it so sparse that things were blatantly obvious.

My one and only niggle and really it was a small one because...greedy me I wanted a bit more of Derek and James after all was said and done and the dust had settled but having said that we did get a complete story, Derek and James are left in a good place and there's no cliffs anywhere in sight so...what can I say..."I'm greedy. I like these two and I just wanted more time with them...maybe in the next story with any luck they're bound to take a vacation eventually, right?"