I probably should have quit while I was ahead... 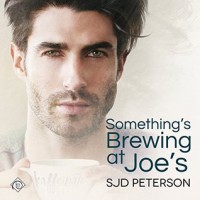 I first read this book back in early July of this year and I guess I went into this thinking that this story might work better for me on audio...it happens. What doesn't happen very often is that things go from well...bad to worse.

My original feelings about this story haven't changed. So here's my original review if you want a refresher...

There's more than just coffee brewing at Joe's, that's for sure...
Murphy and Joe first meet when they hook up at a club shortly after Murphy has arrived in Tampa. Neither man is looking for more than a little no strings attached stress relief.

Joe's frustrated with his 'forced' vacation and he's decided that a night out for a few drinks, some dancing and with any luck a little something more with a hot body is just what the doctor ordered.

When Murphy moves to Tampa on the promise of his dream job being told that said job is on hold is not what he's expecting to hear. He doesn't want to go back to Michigan only to hear a chorus of 'I told you so's' from his family and friends and decides that he's going to find something to keep him afloat until things get sorted out, but being a little frustrated and stressed out over the news pushes him to decide he needs a night out to relax, unwind and just forget about everything for a few hours.

Needless to say there wasn't a lot of personal information exchanged during their one night stand so it's no wonder that Joe's more than a little surprised when he returns to his coffee shop and finds out that his assistant Kallie has hired someone to renovate the upstairs apartment that Joe's been talking about fixing up for as long as Kallie can remember and that someone turns out to be none other than Joe's one night stand Murphy.

Both men decide this isn't going to be a problem...after all they're mature adults right? And just because Joe wants a repeat of what he and Murphy shared and Murphy's determined that things need to stay strictly business...*spoiler alert* willpower...Murphy has none...seriously NONE!!! his determination didn't last a day...wait, I'm not even sure it lasted an hour forget a day. As soon as these two laid eyes on each other again it was game on.

Now I realize this kinda' leads to the thought of 'what the hell?' these two can't keep their hands off of each other and there's roughly 200 pages here, but there's more to this story than just a case of boy-meets-boy, boy-jumps-boy and they all lived happily ever after because let's face it that's sweet but pretty dull when you've got 200 pages to fill, so luckily there's that job...you know the one that Murphy moved to Tampa for...yeah, it's a bit complicated and makes things a little tense between Murphy and Joe.

I really enjoyed this part of the story...or at least the idea of it and to a degree the execution of it worked. More often than not when a story has this type of plot line to it I like a bit of tension and conflict...more so than what was here and while this was ok, for me it would have worked better if things had been not quite so easily resolved.

So along with that, here's the reason this one only got 3 stars from me...it was the sex...seriously 'you know you have too much sex in a story when one of the MCs is complaining that the other MC 'broke his wanker'? and then cuts him off for a couple of days because 'said wanker' is sore...ok, he tried but it was Murphy and as I've already said "Willpower...he has none." I can honestly say I'm not sure that I've encountered a lot...if any stories where an MC is complaining about too much sex and trust me there was...even the bunnies of the world were cringing...forget jealous I'm pretty sure they were with me wondering 'How the hell does anyone have this much sex and accomplish a damned thing?' Thankfully some of it...just some mind you, was not actually on page for which I am grateful because I can honestly see how poor Murphy's wanker got broken...just sayin'

I honestly figured at the very least this was going to remain a 3 star read for me...what I wasn't counting on and please believe me when I say this is a really, really subjective opinion here, but bizarrely enough this one got knocked down a notch because try as I might I just couldn't get past the narrator's voice. Now it's not that it's bad or that I couldn't understand him or any of that and honestly I can see where other people will probably be thinking that maybe Karen's a little cray, cray, but the thing is for me there were times when I'm sure that Joe and/or Murphy were meant to sound all sexy and passionately growly and to me it was more like an angry, ragey growl. In other words for some reason the emotion that was being conveyed wasn't the emotion that I was picking up on...hopefully this makes sense.

So anyways, not to belabor the point I'm just going to summarize by saying Chase Johnson was the narrator for this one and for whatever reason this narrator's voice doesn't work for me and if I'm listening to what's suppose to be an intense, intimate scene between two people it just yanks me out of the story when I feel like one of those people is really angry rather than really passionate...it's me and I'm totally owning this one folks...like I said very, very subjective opinion here.

I highly recommend checking out the audio sample if this one is of interest to you. After all, you never know...you may find you really like this narrator's voice and really that's all that matters at the end of the day is what works for any of us as individuals.

A audio book of 'Something's Brewing At Joe's' was graciously provided by the publisher in exchange for an honest review.