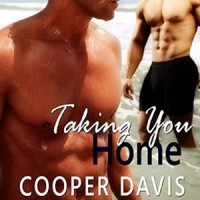 Well this was an interesting experience. When I saw Cooper Davis's 'Boys of Summer' and 'Taking You Home' on audio I was just too tempted so I snapped them up and Brian Pallino was the narrator for both books and he did a solid job on both of these stories. I liked the voices he gave the MCs and the other characters were also well done...no the interesting part for me was the story itself.

It's been a few years since I've read either of these stories and while I can't honestly say that I enjoyed them quite as much this time around I found that with 'Taking You Home' I had a deeper appreciation for some of the things that happened and even though it's been less than 10 years since the book was written the difference in the world as it was back when Cooper Davis wrote this book and now is pretty significant.

So once again maybe this one didn't resonate with me quite as strongly as the first time when I read the book...it was still a story worth revisiting.